New way to address chemoresistance linked to the protein SLFN11 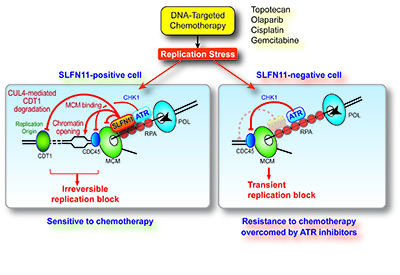 CCR researchers have discovered two complementary ways that the protein Schlafen-11 (SLFN11) affects patient response to chemotherapy. Using cells from patients with small cell lung cancer (SCLC), researchers found that when SFLN11 is expressed, cancer cells are prevented from replicating following chemotherapy. When not expressed, however, a DNA-repairing pathway, known as ATR, continues to function and leads to chemoresistance. These findings, which appeared on February 4, 2021 in PNAS, have implications for how to overcome resistance to chemotherapy and provide new treatment options for patients with SCLC and many other cancers.

Yves Pommier, M.D., Ph. D., Chief of the Developmental Therapeutics Branch, has long been a pioneer in the field of chemoresistance.  In 2012, he discovered that SLFN11 contributed to response to chemotherapy. Specifically, when SLFN11 was turned off, cancer cells became chemoresistant, especially against the platin family of therapies (e.g., cisplatin, carboplatin, oxaliplatin), PARP inhibitors (e.g., talazoparib, niraparib, rucaparib, olaparib), topoisomerase inhibitors (e.g., topotecan, irinotecan, etoposide, doxorubicin) and replication inhibitors (gemcitabine, cytarabine). This finding helped researchers further understand why about 50 percent of patients have tumors resistant to treatment. Since this initial discovery, Pommier and his team have been studying the mechanisms behind SFLN11 and how it works to successfully kill cancer cells following chemotherapy.

This research adds to the growing body of knowledge about SLFN11. What is particularly striking is that the researchers uncovered new information about both SFLN11-positive and negative- tumors. “We found that when SLFN11 is expressed, it can degrade the protein CDT1, which is responsible for initiating replication,” explains Pommier. “This sets into motion the process through which the replication machinery is destroyed irrevocably, with little ability to recover.”

The scenario is completely different in SLFN11-negative tumors. By performing a specialized screen, the team identified the ATR pathway as playing a role in chemoresistance. After exposing these cells to ATR inhibitors, they become responsive to several chemotherapy agents, including topotecan, indotecan, and cisplatin.

Clinical trials testing the combination of ATR inhibitors and chemotherapy in patients with SLFN11-negative tumors have recently begun. In one study, early results indicated that reactivating SLFN11 led to a response to chemotherapy in upper gastrointestinal and genitourinary tumors.

“Our research is further validation of how ATR inhibitors can help overcome drug resistance,” says Pommier. “I also envision using our knowledge about SFLN11-positive and negative- tumors to stratify patients into treatment groups. Those who are positive can be given chemotherapy alone, while those with negative tumors can have an ATR inhibitor added to the treatment regimen. Using SFLN11 as a predictor of treatment response can lead to rapid identification of the most effective treatments, saving time, cost, and suffering.”