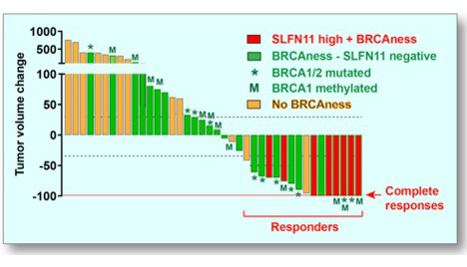 Women with triple-negative breast cancers might benefit from treatment with topoisomerase I (TOP1) inhibitors, a type of chemotherapy currently used to treat colorectal, pancreatic and lung cancers, new research from the Center for Cancer Research suggests. According to mouse studies reported February 19, 2020, in Science Translational Medicine, this class of drugs effectively shrinks tumors bearing genetic markers found in up to one third of women with this difficult-to-treat cancer.

Topoisomerase inhibitors, which cause breaks in DNA and can kill cells that are unable to repair the damage, are not routinely used to treat breast cancer, says CCR Senior Investigator Yves Pommier, M.D., Ph.D., who led the study. However, defects in DNA damage repair are common among triple-negative breast cancers, a type of breast cancer in which tumor cells lack each of three breast-cancer associated proteins (receptors for estrogen, progesterone and human epidermal growth factor 2). Because of this, Pommier and his colleagues suspected that at least some tumors of this type might be vulnerable to these drugs.

Pommier’s team collaborated with scientists at the Curie Institute in Paris to test the effects of TOP1 inhibitors in mice implanted with the cancer cells of women with triple-negative breast cancer. Such mice are known as xenograft models of the cancer. The researchers began by treating 40 different xenograft models with irinotecan, a drug that has been widely used to treat metastatic colon cancer since it was approved by the U.S. Food and Drug Administration in 2000. The drug caused tumors to shrink in 15 of the 40 models. Some tumors disappeared completely and did not return for the duration of the experiments. Similar responses were seen with newer TOP1 inhibitors, indotecan and indimitecan, two agents developed in Pommier’s laboratory that eliminate some of the side effects associated with irinotecan and are now in clinical testing.

Genetic analyses indicated that the tumor models that responded best to TOP1 inhibitors had mutations that compromised tumor cells’ ability to repair damaged DNA (BRCAness; see caption). In addition to a genetic signature representing these repair deficiencies, the team identified two additional markers of tumors’ response to the treatment: high levels of activity from a damage-response gene called Schlafen 11 (SLFN11) and the loss of a tumor suppressor called retinoblastoma transcriptional corepressor 1 (RB1).

“It could be that up to one-third of patients with triple-negative breast cancer would fit these three criteria and would be likely to respond to any irinotecan-based therapy,” Pommier says. Clinical trials will be needed to evaluate the effects of irinotecan and new TOP1-targeted drugs in this group of women.

The team’s preclinical studies also suggest a therapeutic strategy for women whose triple-negative breast cancer is unlikely to respond to TOP1 inhibitors alone. In their experiments, a subset of tumors that failed to respond to irinotecan did shrink when mice were given the drug in combination with an ATR inhibitor, which further impairs cells’ ability to cope with damaged DNA. Experimental ATR inhibitors are in development and could be combined with TOP1 inhibitors in clinical trials for women whose tumors have the appropriate genetic markers, Pommier says.