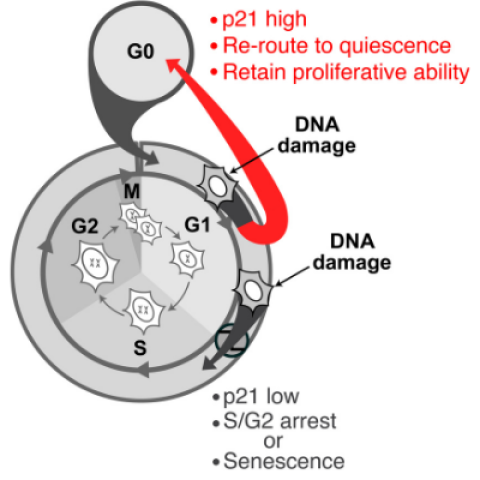 New findings suggest that, even if some cells experience DNA damage during a critical phase in the cell cycle called G1, some cells may continue on to the next phase. [Cappell et al.]

CCR researchers have uncovered a previously unknown phenomenon that allows some cells to continue through the cell cycle despite experiencing DNA damage – even past natural safety checkpoints within the cell cycle that are meant to stop the problem from occurring. The results, which appeared January 13, 2021, in Science Advances, suggest that the timing of DNA damage is crucial for determining whether a faulty cell survives the cycle.

When cells begin to divide and replicate as part of their natural cycle, they transition from their resting state to one called the G1 phase. In this phase, cells have several important checkpoint mechanisms to ensure that the cell is healthy enough to proceed to the next stage of the cell cycle.  “When these mechanisms fail due to genetic mutations, cells can progress through G1 phase unimpeded and can ultimately lead to cancer,” explains Steven Cappell, Ph.D., an Investigator in the Laboratory of Cancer Biology and Genetics.

Previously, scientists thought that cells with DNA damage could not pass these safety checkpoints in the G1 phase – the cells would either repair the DNA damage or die. However, Cappell, in collaboration with former postbac and current M.D./Ph.D. student Jenny Nathans and postdoctoral fellow James Cornwell, Ph.D., helped uncover important evidence showing that cells with damaged DNA can progress past these critical checkpoints.

The team studied individual cells for days at a time, using live-cell time-lapse microscopy, single-cell tracking software, and fluorescent biosensors to detect the cell’s safety checkpoint mechanisms. They added a substance to induce DNA damage for cells of different ages in the cell cycle.

“Strikingly, the majority of cells seemed to ignore the DNA damage because they failed to trigger the checkpoint between G1 and the next phase, and proceeded into the [next] phase anyway,” says Cappell.

Further investigation revealed that the timing of DNA damage during the cell cycle influenced the likelihood that damaged cells would slip past the checkpoints. The researchers found that the cell’s response to DNA damage is relatively slow compared to the speed of the cell cycle. This means if cells were already very close to the next phase of the cell cycle at the time DNA damage happened, they were more likely to continue into that phase. If the cells were still early in the G1 phase, they were more likely to revert back to a resting state. Cappell describes these observations as a form of inertia, whereby the cell will continue moving towards the next phase regardless of safety checkpoint signals.

Importantly, cells that were genetically identical were more likely to share the same cell cycle fate than non-identical cells. This suggests that factors specific to the cells themselves influence their fate during the cycle, rather than random chance, according to Cappell.

He emphasizes that more studies are needed to understand how these new findings apply to cancer. “We are currently interested in understanding what are the long-term consequences of the checkpoint failure we observed. We would like to find out if the cells that entered the next phase despite considerable DNA damage can become cancerous and eventually form a tumor,” he says.