Committing to cell division may be clue to cancer cell growth 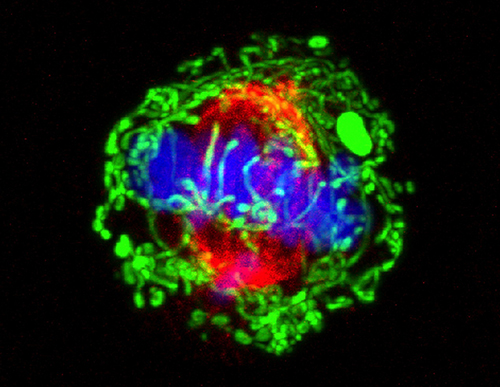 CCR researchers have discovered that the amount of the protein Emi1 expressed within a cell determines whether Emi1 is a target or an inhibitor of the cell cycle regulator known as the anaphase promoting complex, or APC. When Emi1 expression is high, APC activity is blocked, and cells are committed to dividing. The results, published June 6, 2018, in Nature, suggest that by understanding how normal cells commit to cell division, it may be possible to target this pathway in cancer cells and prevent them from dividing when they should not.

For a cell, making the decision to divide is a crucial one. The cell must integrate pro-growth and stress signals from its environment to decide whether or not the time is right to enter the cell cycle and complete the process. Scientists have known for some time that in order to divide, a cell must activate a family of proteins known as cyclin-dependent kinases, increase expression of genes regulated by the E2F protein family and inactivate the APC. Inhibiting the APC was shown to be the point-of-no-return for a cell entering the cell cycle, but how this step is controlled was not known.

Steven Cappell, Ph.D., Investigator in CCR’s Laboratory of Cancer Biology and Genetics, and his colleagues used a fluorescent biosensor to monitor APC activity over time in live cells growing in petri dishes. By examining known APC substrates, they showed that loss of Emi1 significantly reduced the rate of APC inactivation. This suggested that Emi1 controls APC activity for cell cycle entry.

Interestingly, the investigators found that Emi1 levels are low early in the cell cycle and that this low level was due to APC-mediated Emi1 destruction. How, they asked, could a protein that is the target of APC also be an inhibitor of APC? The researchers demonstrated that at higher levels of expression, Emi1 could bind a second site on APC. Disrupting the interaction between Emi1 and APC at the second site prevented APC inactivation. Importantly, both a computational model and studies of the individual proteins conducted in test tubes supported the live cell findings.

“So far we have studied the question about how cells make the decision to divide in normal, non-cancerous cells,” said Dr. Cappell. “Now we’re interested in understanding how this decision is perturbed in cancer cells and maybe, once we understand that, we can develop new drugs that would specifically target cancer cells.”