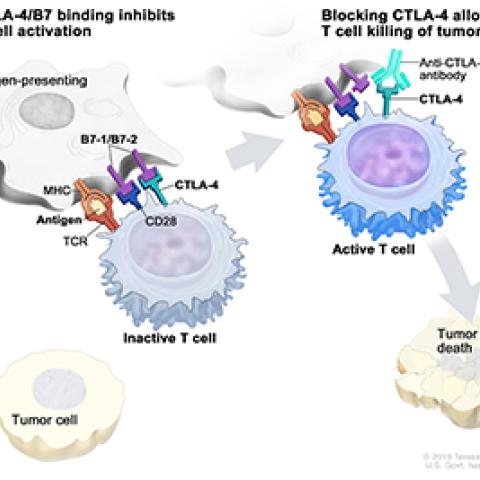 CCR scientists have identified a molecular signature that could help clinicians assess whether someone with melanoma is likely to benefit from immunotherapy. The discovery, reported April 13, 2020, in Nature Medicine, was made using four genetically engineered mouse models of the deadly skin cancer. The models give researchers new power to investigate why some melanomas respond well to immunotherapy and others do not.

Immune checkpoint inhibitors that boost the body’s ability to fight cancer by releasing natural brakes on the immune system are effective for about a third of patients with metastatic melanoma. These drugs can also cause serious side effects, such as overamping the immune system, and researchers have struggled to reliably identify the best candidates for treatment.

Researchers led by CCR’s Scientific Director for Basic Research, Glenn Merlino, Ph.D., also Senior Investigator in the Laboratory of Cancer Biology and Genetics, have spent more than a decade developing and characterizing new mouse models that faithfully replicate key features of human melanoma so they can better understand the disease. Now, they have assembled a panel of four mouse models that, like patients, differ in their underlying biology and their response to treatment.

Although the mice have mostly the same genetic profiles, differences in cancer-promoting gene mutations, therapeutic response rates and immune composition make each model unique. Importantly, immune checkpoint inhibitors slow tumor growth in two of the models but are ineffective in the other two. “It turns out these four models represent quite well the diversity seen in patients,” says Eva Pérez-Guijarro, Ph.D., a postdoctoral fellow in Merlino’s lab.

For the current study, Pérez-Guijarro and Staff Scientist Chi-Ping Day, Ph.D., compared gene activity between mice that responded to immune checkpoint inhibitors and those that did not. They found that many of the genes whose activities were most strongly associated with immunotherapy outcomes were involved in the development of melanocytes, the pigment-producing cells from which melanoma begins. The more closely the activity of 45 key genes resembled that of melanocytes’ precursor cells, rather than that of fully developed melanocytes, the less likely a tumor was to have responded to immune checkpoint inhibitors.

After making this discovery in the mice, the team found the same relationship in gene expression data from patients with melanoma. Based on an analysis of the same 45 genes, tumors’ whose genetic activity most closely resembled that of mature melanocytes were most likely to have responded to immune checkpoint inhibitors. That suggests that combining information about these genes with other biomarkers of immunotherapy response could enhance the predictive power of those tools.

Although the discovery could improve clinicians’ ability to predict which patients will respond to existing immune checkpoint inhibitors, it also hints at a strategy for making these treatments effective for more patients. “If you can enhance the differentiation of the melanoma cells, that might mean you can turn resistant disease into a sensitive disease,” Day says. The new mouse models will be critical for testing this idea as well as investigating other potential melanoma treatments, the researchers say.