Embryonic stem cells have their own strategy for protecting chromosome ends 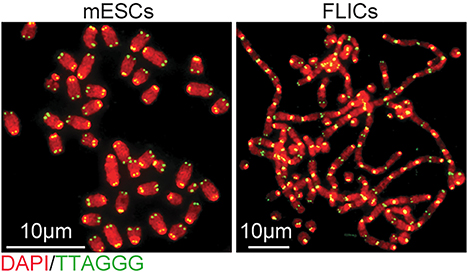 According to new research from CCR scientists, embryonic stem cells have a unique way of protecting their telomeres, the structures at the ends of chromosomes that shorten with every cell division. A research team led by Eros Lazzerini Denchi, Ph.D., an NIH Stadtman investigator in CCR’s Laboratory of Genomic Integrity, has found that rather than treating exposed telomeres as damaged DNA as most cells do, embryonic stem cells call on genes typically used only during the earliest stage of development to stave off unwanted DNA repair. The team’s findings, which come from studies of mouse embryonic stem cells, are reported November 25, 2020, in Nature.

By revealing an unexpected way cells can protect their telomeres, the new findings may help explain a survival strategy employed by some cancer cells, which must find a way to circumvent growth limits imposed by the natural shortening of telomeres that occurs as we age.

Embryonic stem cells, which arise early in an embryo’s development, have a unique capacity to become virtually any of the body’s specialized cell types. Lazzerini Denchi and colleagues first discovered their unusual approach to protecting telomeres when they found that the cells can survive without a protein called TRF2, which binds to and protects chromosome tips. The protein is absolutely essential for hundreds of different types of cells. Without it, exposed chromosome tips trigger faulty activation of DNA damage repair pathways, which stitch the unprotected ends together. Chromosomes fuse together and cells lose the ability to divide. But when Lazzerini Denchi’s team removed TRF2 from embryonic stem cells, chromosomes maintained their integrity and the cells continued to proliferate.

“We expected the cells to be really sick, but instead they were totally fine,” he says. As soon as the researchers prompted the TRF2-missing stem cells to differentiate into a more advanced developmental state, however, they behaved like any other cells without TRF2: chromosomes fused and the cells quickly died.

This response appeared to be key to the cells’ ability to flourish without TRF2. Whereas cell division gradually shortens telomeres in adult cells, their sequences are continuously extended in early stages of development. By reactivating genes used early in development, embryonic stem cells may be able to elongate exposed telomeres rather than triggering a DNA damage response, the researchers say.

The team’s experiments showed that one of these developmental genes, ZSCAN4, appeared to be a key part of embryonic stem cells’ strategy for protecting their chromosome ends. This gene is sometimes active in cancer cells, which might help them escape normal growth restrictions imposed by telomere shortening.