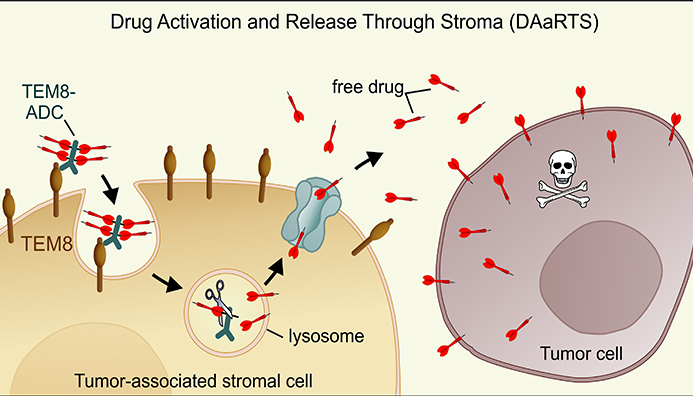 An illustration showing the mechanism of the antibody-drug conjugate (ADC), which targets the cell surface receptor called TEM8, a protein found on tumor-associated stromal cells (orange). When these stromal cells take up the ADC, they cleave the drug (red) from the antibody (gray) and release the drug to kill neighboring tumor cells (purple).
Photo courtesy of Brad St. Croix

In a preclinical study, a Center for Cancer Research investigator-designed therapy using a drug attached to an antibody which can target blood vessels, connective tissue and other cells that infiltrate tumors—collectively known as the tumor stroma—led to shrinkage and even eradication of various types of tumors. The findings appeared in the Journal of Clinical Investigation on June 4, 2018.

A team led by Brad St. Croix, Ph.D., Senior Associate Scientist, Mouse Cancer Genetics Program, tethered an antibody to a drug to create what’s known as an antibody-drug conjugate (ADC). The antibody directs the drug toward cells that express a specific protein and kills the tumor cells but not the surrounding healthy tissue. St. Croix and colleagues tethered the drug monomethyl auristatin E (MMAE) to an antibody they created called m825. m825 targets TEM8, a cell surface protein expressed at high levels on tumor-associated stromal cells, including the cells of blood vessels that supply tumors with the oxygen and nutrients they need to grow and expand.

The new study was the result of a large CCR team effort, combining St. Croix and his laboratory's longstanding interest in stromal cell targeting with the antibody-engineering expertise of Dimiter Dimitrov, Ph.D., a former Senior Investigator of CCR's Cancer and Inflammation Program, and his lab. The two groups had also collaborated to create ADCs against another tumor stroma cell surface protein, CD276.

An earlier study by St. Croix and other CCR investigators had shown that targeting TEM8 with antibodies alone could slow tumor growth. “We wondered whether we could make TEM8 antibodies even more potent with small, targeted-treatment warheads,” St. Croix says. In the new study, the m825-MMAE conjugate caused human colon, breast, ovarian, lung and pancreatic tumors grown in mice to shrink, and in most cases, disappear. In contrast, when the researchers treated mice bearing human colon, breast and lung tumors with the antibody alone, they saw only modest decreases in tumor growth.

Further unravelling this “neighbor-eradicating” mechanism, the researchers isolated TEM8-expressing stromal cells from human colon tumors and treated them with m825-MMAE. When they incubated the cell culture medium where stromal cells grew with human colon cancer cells, the cancer cells’ survival significantly declined. Chemical analysis revealed free MMAE in the cell culture medium, suggesting that once tumor-associated stromal cells take up the ADC, they cleave MMAE from m825 and release the drug to kill nearby tumor cells.

Currently available ADCs typically target proteins found only in a subset of a single tumor type. By contrast, the stroma targeted by m825-MMAE is abundant in many tumor types, especially in pancreatic, colon and breast cancers, where it can comprise up to 90 percent of the tumor mass. Although m825-MMAE still requires testing in humans in clinical trials, the findings suggest it may have the potential to treat a broad swath of cancers.