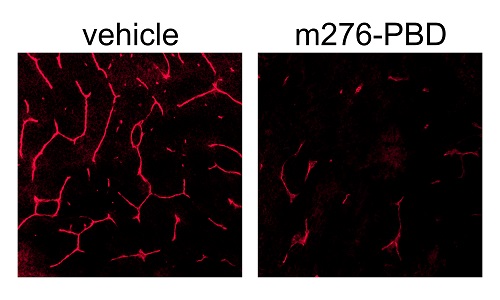 These photos show the loss of blood vessels in tumor tissue samples after treatment with an antibody-drug conjugate (ADC) consisting of an antibody targeting the protein CD276, expressed at high levels on both tumor cells and the blood vessels that nourish them, tethered to the drug pyrrolobenzodiazepine. When the ADC reaches its target cells, the drug detaches and destroys them.

Immune proteins known as antibodies have transformed cancer treatment. These antibodies typically target proteins crucial to tumor cell survival, but they’re often not potent enough. This has led to growing interest in antibody-drug conjugates (ADCs), or antibodies tethered to drugs. In a pre-clinical study published in Cancer Cell, Center for Cancer Research investigators report designing an ADC that destroys both tumor cells and tumor blood vessels in a variety of cancers, which has improved overall survival in mice.

In an ADC, the antibody acts like a guided missle that directs the drug toward cells that express a specific protein, or signpost. The drug then kills those cells. Brad St. Croix, Ph.D., Senior Associate Scientist, Mouse Cancer Genetics Program, and colleagues created an antibody, m276, that targets CD276, a protein they found to be expressed at high levels on not only malignant tumor cells but also the blood vessels that supply them with oxygen and nutrients.

St. Croix’s team treated mice implanted with various tumor types with two different ADCs. m276 tethered to the drug monomethyl auristatin E (MMAE), used in many other ADCs currently in development, caused most tumors to shrink significantly. Their blood vessels, however, resisted MMAE treatment, evidently because they expressed a multidrug transporter called P-glycoprotein, which pumps MMAE out of cells.

The researchers then treated mice with m276 tethered to the drug pyrrolobenzodiazepine (PBD), which is poorly recognized by P-glycoprotein. These mice had even more inhibited tumor growth, including some complete regressions, and their tumor vessel density drastically decreased shortly after treatment. m276-PBD also significantly shrank tumors in mouse models of metastatic colon and breast cancer and prolonged survival. Overall, targeting both tumors and tumor blood vessels using m276-PBD shows promise as a treatment for numerous types of cancer.