A new set of genes linked to metastasis in melanoma 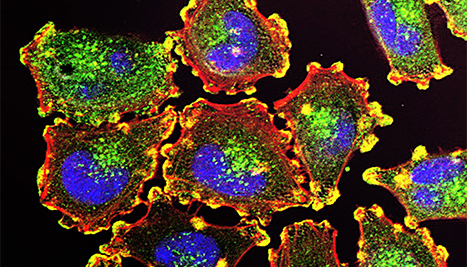 Building on knowledge about how melanocytes develop in the embryo, researchers from CCR discovered that genes expressed in melanoblasts, embryonic melanocyte cells, can be commandeered by melanoma cells to take on metastatic features. This is the first time that the similarities between embryonic and metastatic cells has been tested and confirmed at such a large-scale gene expression level. Using a genetically engineered mouse model, the researchers went on to uncover a set of 43 genes that can predict patient survival. These results were published in Nature Communications on January 9, 2020.

Kerrie Marie, Ph.D., a research fellow in the lab of Glenn Merlino, Ph.D., Senior Investigator in the Laboratory of Cancer Biology and Genetics, developed the hypothesis upon which this research was based.

“We raised the question of whether embryonic processes, pathways and genes were linked to metastatic cells but distinct from what normal cells do,” says Merlino. “It makes sense that there would be a link between embryonic and metastatic cells. Both migrate great distances and have the ability to survive and proliferate in new environments.”

The researchers used a mouse model in which green florescent protein (GFP) was expressed in melanocytes and melanoblasts at four different developmental stages, including two embryonic stages and two mature melanocyte stages. They then extracted cells from each stage and performed RNA sequencing to identify genes specific to the embryonic stages and found these to be related to metastasis in melanoma.

Through this process, Marie identified two genes from the KDELR family that had different effects on cancer development. KDELR3 expression promoted metastasis while KDELR1 expression suppressed it. “This is the first time that an association between these genes and metastasis in melanoma has been made,” says Marie. “KDELR3 also regulates the protein KA11, which serves as a suppressor of metastatic activity, further clarifying the important role of KDELR3 in metastasis.”

To assess whether these findings were relevant to humans, Marie examined multiple melanoma patient databases. She found increased expression of KDELR3 in patients with advanced-stage melanoma, showing the link between melanoma disease progression and embryonic development, an approach enhanced by the use of animal models.

These findings open numerous avenues for further exploration. Marie plans to perform single-cell sequencing to look for genes that may be involved in the early stages of melanoma metastasis. She’s also interested in investigating how KDELR3 regulates protein-to-protein pathways, which may have applications to immunotherapy.

“One big reason to look at embryonic development is that if we find a gene that is expressed in embryos but not in adults, the specific drug target may prove to have fewer side effects,” adds Marie. “This is an approach worth exploring.”