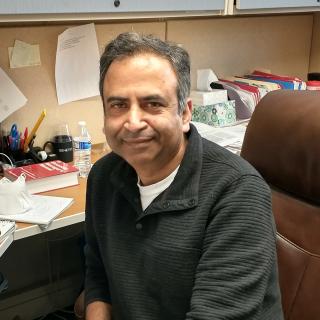 Breast cancer is one of most common malignancies in women. Mutations in BRCA1 and BRCA2 are linked to increased risk of early onset familial breast and ovarian cancers. In an effort to reduce the mortality due to breast cancer through prevention and early diagnosis, sequencing based genetic tests are available to identify BRCA1 and BRCA2 mutation carriers. Such tests have led to identification of several hundreds of sequence variants that are of unknown clinical significance. We are using mouse embryonic stem cells as well as humanized and knock-in mouse models to distinguish between neutral or non-pathogenic and deleterious or pathogenic variants. Dr. Sharan is Deputy Director of the Mouse Cancer Genetics Program (MCGP). Dr. Sharan is also Director of the Center for Advanced Preclinical Research (CAPR) and heads the BRCA Variants Analysis Unit. A list of classified variants can be found on this link to the BRCA Variants Analysis Unit.

Each year more than 2 million new cases of breast cancer are diagnosed worldwide. Availability of novel diagnostic tools and targeted therapies together with changes in lifestyle have clearly contributed to a decline in mortality due to breast cancer. While there are many possible risk factors associated with the development of breast cancer, the best-established indicator is the inheritance of breast cancer susceptibility genes such as BRCA1 and BRCA2. Mutations in BRCA1 and BRCA2 are linked to increased risk of early onset familial breast and ovarian cancers with disease penetrance estimated to be 35-80%. In 1997, just a few years after the cloning of BRCA1 and BRCA2, their role in the repair of double strand breaks (DSBs) was uncovered. The proteins encoded by these genes were found to interact with DNA recombinase RAD51, which alluded to their role in homologous recombination (HR). Loss of function mutations in these genes was shown to result in increased genomic instability, which suggested their role as caretakers of the genome.

In an effort to reduce the mortality due to breast cancer through prevention and early diagnosis, sequencing-based genetic tests are available to identify BRCA1 and BRCA2 mutation carriers. Such tests have led to identification of thousands of sequence variants that are of unknown clinical significance due to lack of sufficient epidemiological data that can be used to determine their pathogenicity. The overarching goal of my laboratory over the past two decades has been to understand the functional significance of variants of unknown clinical significance (VUS) identified in BRCA1 and BRCA2 using mouse models as well as mouse embryonic stem cells (mESC). We have undertaken genetic approaches for functional dissection by generating targeted mutations found in breast cancer patients into specific functional domains of BRCA2 in mice. In doing so, we not only aim to functionally classify VUS but also utilize pathogenic variants to uncover new biological functions of these proteins. We believe that functional analysis of pathogenic variants will provide clues to the pathways that are disrupted and lead to tumorigenesis.

We have developed assays to functionally characterize BRCA1 and BRCA2 variants and use our findings, together with other available epidemiological, structural, functional and in silico prediction models to classify the variants as neutral or pathogenic. The extent to which a specific variant complements the lethality of mESC lacking endogenous Brca1 or Brca2 and the known functions of these proteins in DNA repair is used as a surrogate readout to decipher their association with risk of developing the disease. In 2014, due to the clinical relevance of this work, we established the BRCA Variants Analysis Unit in MCGP as a dedicated translational resource for functional classification of BRCA variants. Our current efforts in the unit as well as in my laboratory are primarily focused on BRCA2. We are developing CRISPR-Cas9 based high throughput functional assays for BRCA2 in humanized mESC that lack endogenous Brca2 but carry a single copy of full-length human BRCA2 transgene cloned in a bacterial artificial chromosome.

Our laboratory has generated a number of mouse models to assess the effects of BRCA2 variants on growth and development, fertility and tumorigenesis. This approach is especially important for variants that do not severely disrupt the protein function and show mild phenotypic consequences in mESC. We have generated mice with a single amino acid substitution (Gly25Arg) in the PALB2 (Partner and localizer of BRCA2) binding domain of BRCA2 and showed the importance BRCA2-PALB2 interaction in the repair of DSBs by HR as well as protection of stalled replication forks. We have also examined the physiological significance of BRCA2-DSS1 (Deleted in split hand/split foot1) interaction using a knock-in mouse model with a leucine to proline change in codon 2431 (Leu2431Pro, equivalent to human Leu2510Pro), which weakens this interaction. Our functional studies in mESC showed that this interaction is critical for RAD51 recruitment and repair of DSBs by HR. Surprisingly, our functional studies in mice revealed that the interaction is dispensable for repair of DNA replication induced breaks as well as repair of DSBs during meiosis. When bound to BRCA2, DSS1 has been reported to act as a DNA mimic and facilitate RAD51 recruitment by displacing Replication Protein A (RPA) from single-stranded (ss) DNA at DSBs. Our findings suggest that the presence of homologous chromosomes in proximity during early prophase I stage of meiosis may compensate for the defect in BRCA2-DSS1 interaction. This is supported by our observation that tethering a biotinylated homologous DNA to the site of DSBs using streptavidin-fused Cas9 partially rescued the HR defect in mESC expressing this variant.

We are generating new mouse models to functionally characterize another important domain of BRCA2, the BRC domain containing eight BRC repeats spanning over 1100 amino acids. Several of these repeats have been shown to bind to RAD51. Each repeat consists of 35-40 amino acids with an evolutionarily conserved core consisting of hydrophobic residues that facilitate close contact with RAD51. In spite of such an essential function, no cancer causing missense substitution has been identified in this region, which suggests functional redundancy between these repeats. We and others have shown that a single BRC is sufficient for RAD51 recruitment and has partial HR activity in mESC. We are generating mice with a single BRC, repeat 2 or repeat 4, to examine whether the residual HR activity is sufficient for normal physiological functions.

Another major aim of our laboratory is to identify genetic interactors of BRCA2 that may contribute to cell viability and tumorigenesis. This aim is based on the fact that loss of essential genes such as BRCA2 in embryonic stem cells induces cell cycle arrest and apoptosis yet in somatic cells loss of these genes result in tumorigenesis. It is believed that mutations in genes such as TRP53 enables these cells to overcome the growth arrest induced by the loss of such essential genes. We are using mESC to perform genetic screens to identify genes that can contribute to the survival of BRCA2-deficient cells. Because the genome of ES cells is quite stable even after several passages, they represent a powerful and simple yet physiologically relevant system for such screens. More recently, we have initiated a CRISPR/Cas9-based whole genome screen to identify genes that support viability of Brca2ko/ko mESC and may contribute to tumorigenesis. Over the years, we have identified a number of genetic interactors such as GIPC3, PARP1, TET2 and BRE. We have shown GIPC3 to contribute to cell viability via its interaction with APPL1/2, adaptor proteins that regulate multiple signaling pathways. Similarly, BRCC45/BRE contributes to cell viability by recruiting USP7, a deubiquitylase, to stabilize cell cycle regulator CDC25A. More recently, we demonstrated that TET2 loss results in resistance to PARP inhibitors, such as olaparib. Our functional studies revealed that TET2 loss contributed to resistance to PARPi because of its impact on stability of stalled forks. We are currently examining the possibility of modulating TET2 activity that can be used for restoring PARPi sensitivity of resistant tumors in patients.

The long-term objective of my research program is a comprehensive investigation into the biological functions of BRCA2 as well as identification of its genetic interactors. Our work on the genetic interactors will provide insight into initiation of BRCA-mediated tumorigenesis. We anticipate that these studies will result in identification of potential therapeutic targets that can be used to impede or prevent the aberrant path towards tumorigenesis.

Dr. Sharan is also the Director of the Center for Advanced Preclinical Research (CAPR) and head of the BRCA Variants Analysis Unit. 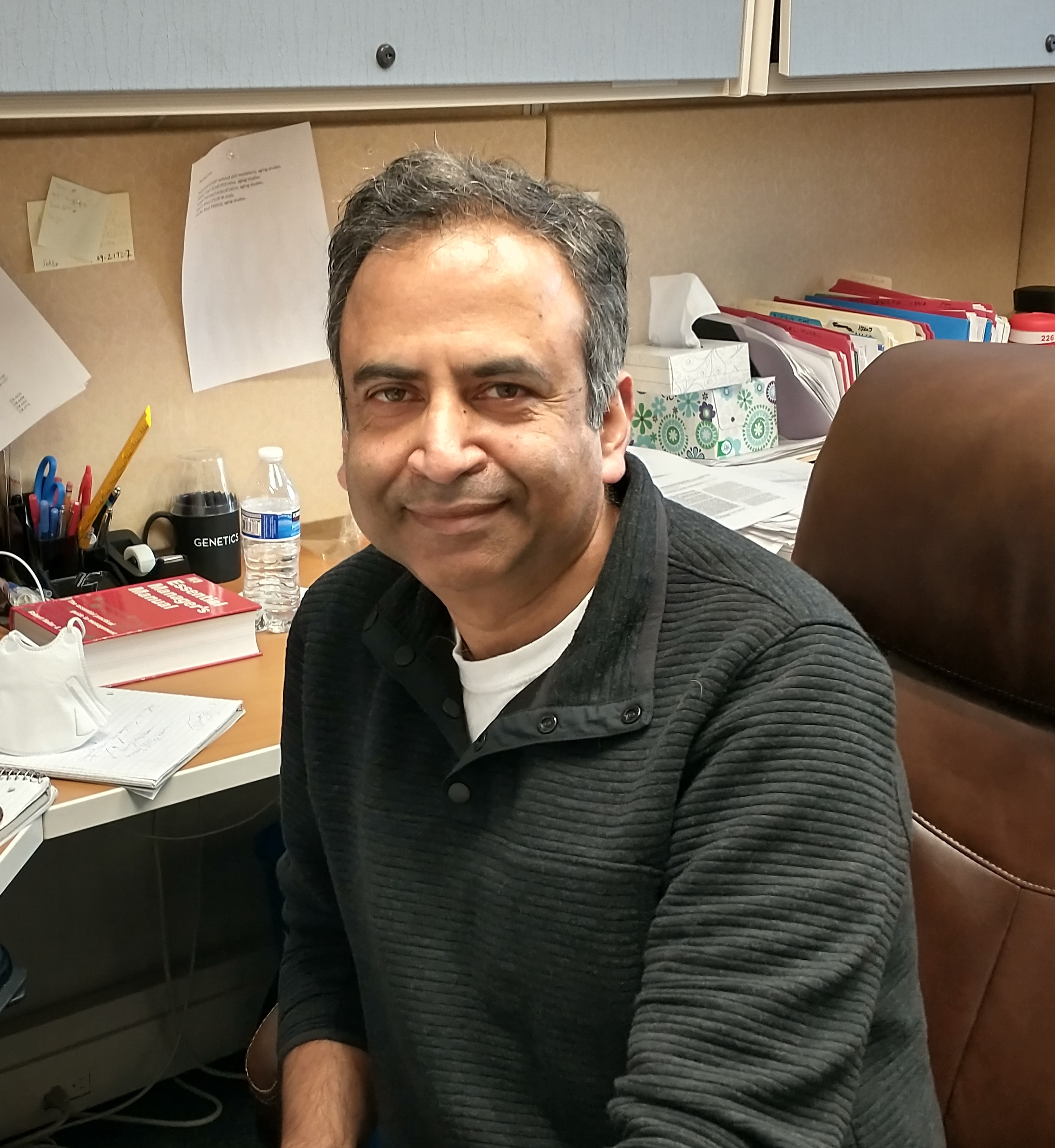 Dr. Sharan obtained his B.Sc. in botany and M.Sc. in genetics from Delhi University, Delhi. In 1994, he obtained his Ph.D. in genetics under Dr. Terry Magnuson at Case Western Reserve University. He then joined Dr. Allan Bradley's laboratory at Baylor College of Medicine as a Howard Hughes Medical Institute Associate. In 1998, Dr. Sharan established the Genetics of Cancer Susceptibility Group in the ABL-Basic Research Program. His group is involved in the functional analysis of tumor suppressor genes in mice. In 1999, Dr. Sharan joined the Center for Cancer Research, NCI. In 2008, Dr. Sharan received the NCI Director's Intramural Innovation Award and in 2009 he received the NIH merit award and the Arthur Flemming Award for his work on functional analysis of BRCA1 and BRCA2. Dr. Sharan is also the Scientific Director of the Center for Advanced Preclinical Research (CAPR).

CCR scientists have discovered a way cancer cells can become resistant to PARP inhibitors, targeted therapies that are used to treat some ovarian, breast and prostate cancers. Learn more...

Damage to DNA is unavoidable. Chemicals, sunlight and routine cellular activities distort the genetic code by modifying its components and severing DNA strands. Most of the time, such damage has no harmful consequences because cells’ sophisticated DNA repair systems rush to replace the errors and mend the breaks. Learn more...