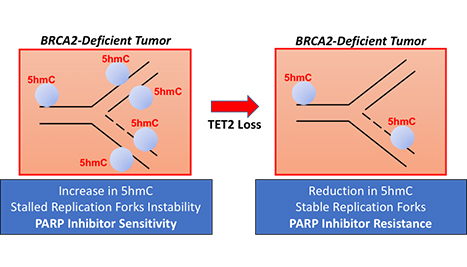 CCR scientists have discovered a way cancer cells can become resistant to PARP inhibitors, targeted therapies that are used to treat some ovarian, breast and prostate cancers.

PARP inhibitors, which are now being evaluated against an even wider range of cancers, are used to treat tumors whose cells have problems repairing damaged DNA, often due to mutations in BRCA1 or BRCA2 genes. They are thought to exploit this weakness by targeting other DNA repair proteins and leaving cancer cells unable to deal with damage to their genomes, ultimately leading to their death.

Unfortunately, many patients who respond to PARP inhibitors eventually develop resistance to the treatment. Researchers have uncovered various changes that enable cancer cells to survive PARP inhibitors, but some resistance has remained unexplained. A new study, published August 18, 2020, in Science Signaling, explores this area of interest and was led by Shyam Sharan, Ph.D., Deputy Director of CCR’s Mouse Cancer Genetics Program and Scientific Director of the Center for Advanced Preclinical Research.

Dr. Sharan’s team conducted a genetic screen to identify factors that can make BRCA-deficient cells that are sensitive to PARP inhibitors stop responding to the drug. Their screen led them to TET2, an enzyme that adjusts epigenetic markers on the genome, converting 5-methylcytosine chemical marks, which can dampen gene activity, to a mark known as 5-hydroxymethycytosine (5hmC).

Suhas Kharat, Ph.D., and Xia Ding, Ph.D., postdoctoral researchers in Sharan’s laboratory, found that TET2 is critical for maintaining the integrity of the genome. It is particularly important for determining the stability of stalled replication forks, structures that form on DNA strands when replication is paused due to damage. These stalled forks are usually degraded in BRCA2-defective cells, but when those cells lack TET2, stalled forks remain intact.

Sharan’s team linked this effect directly to TET2’s placement of 5hmC marks on the genome. When they chemically treated cells to boost levels of 5hmC, stalled replication forks were degraded. The finding suggests a strategy to combat at least some of the resistance to PARP inhibitors that develops in patients, Sharan notes. “The fact that increasing 5hmC levels can degrade the fork is very, very exciting,” he says. “This is proof of principle that by increasing 5hmC levels we may be able to restore sensitivity.”