The capture of a molecular arrangement that exists for a fraction of a second may improve drug design. 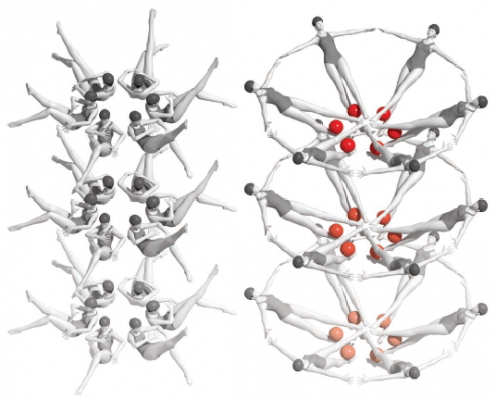 For more than half a century, researchers have used a method called X-ray crystallography to visualize exactly how atoms are arranged within proteins and other biological molecules. The technique produces remarkably detailed images that can help reveal how molecules function and how their activity might be manipulated with drugs to treat disease. Structures obtained in this way have been instrumental in developing and improving targeted therapies for cancer.

X-ray crystallography generates static snapshots of molecules. This year, a team of scientists led by Yun-Xing Wang, Ph.D., a Senior Investigator in CCR’s Structural Biophysics Laboratory, took advantage of groundbreaking new technology to capture the dynamics of a gene-regulating RNA structure at an atomic level. Their image shows a structure called a riboswitch in the process of reorganizing itself to regulate protein production.

Riboswitches are elements at the ends of some messenger RNA molecules that reconfigure themselves in the presence of particular small molecules to alter gene expression. Based on prior work in his laboratory, Wang had speculated that the riboswitch molecule they were studying goes through a transient form that lasts only a few milliseconds after its small molecule binds.

Conventional tools would not be able to capture this transient structure. Wang and his colleagues used an ultrafast, high-intensity radiation source called an X-ray free-electron laser (XFEL). XFEL generates extremely bright X-ray light in pulses lasting less time than it takes light to travel the width of a human hair. For structural biologists, such speed is equivalent to having a very fast shutter on a camera, freezing the action of even the fastest molecular transformations. For their experiments, the scientists used tiny nanocrystals of the riboswitch, which allowed the riboswitch’s activating molecules to quickly diffuse through the crystals, triggering a shape change in all RNA molecules in the crystal.

The team’s achievement, reported in Nature, suggests that crystallography can now be used to capture even the most fleeting steps of biochemical reactions. A series of images captured in this way could allow researchers to watch biological processes unfold in real time with atomic-level detail. Visualizing the conformational changes that proteins, DNA and RNA undergo when they interact is critical to understanding how they function and designing drugs that modify their activities, Wang says.