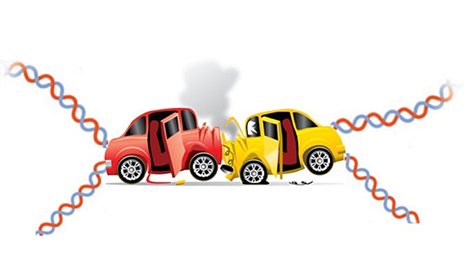 An illustration of a collapsed replication fork, a structure formed when a group of proteins (represented by the cars) unwinds DNA strands and copies them individually. Fragility hot spots in the genome called poly(dA:dT) tracts can lead to abnormal DNA structures that can stall replication, which causes replication fork collapse and harmful DNA double-strand breaks.
Photo courtesy of the Nussenzweig lab

Double-strand DNA breaks—the most dangerous form of DNA damage, which can lead to cancer—don’t happen randomly but at specific sites in the genome during replication, the process of DNA making exact copies of itself before cell division. In a study published in Cellon August 2, 2018, Center for Cancer Research investigators report that these breaks tend to occur at poly(dA:dT) tracts, long strings of adenine and thymine, two of the basic building blocks of DNA; the adenine on one strand of DNA bonds to thymine on the other strand.

Researchers led by Andre Nussenzweig, Ph.D., Chief, Laboratory of Genome Integrity, homed in on DNA replication largely because of a 2017 finding by other scientists that traced nearly two-thirds of the mutations that cause cancer to errors in DNA replication. Also, chemotherapy typically works by blocking replication, which is uncontrolled in cancer cells. “Our question was very simple at the start,” Nussenzweig says. “Are the errors random, or are there certain sites in the whole genome that are somehow more fragile than others and prone to collapse, causing a DNA break?”

The researchers treated mouse and human cancer cells in the lab with a special compound that stalls replication forks, structures that form when a group of proteins unwinds the two strands that make up DNA and then copies them individually. If replication forks are stalled for too long, they can collapse and form double-strand breaks. The researchers found that double-strand breaks were most heavily clustered at poly(dA:dT) tracts.

What makes poly(dA:dT) tracts so fragile? During replication, Replication Protein A (RPA) binds to unwound single-stranded DNA, which is thought to prevent it from folding into structures that could stall replication forks and lead to double-strand breaks. The researchers wondered whether poor binding of RPA to single-stranded poly(dA:dT) tracts makes them more susceptible to breakage. Sure enough, when they used a technique to pull down and sequence the DNA bound to RPA in mouse cancer cells, they saw that RPA didn’t bind to single-stranded stretches of adenine, leaving these regions prone to breakage.

Knowing the DNA sequence of these fragile sites and why they break represents a first step toward exploring ways to prevent potentially cancer-causing DNA breaks and replication failure, Nussenzweig says. In future studies, his team plans to investigate whether passenger deletions—genes that are deleted along with cancer-causing genes but aren’t themselves thought to drive cancer—may actually be the result of breaks at poly(dA:dT) tracts.