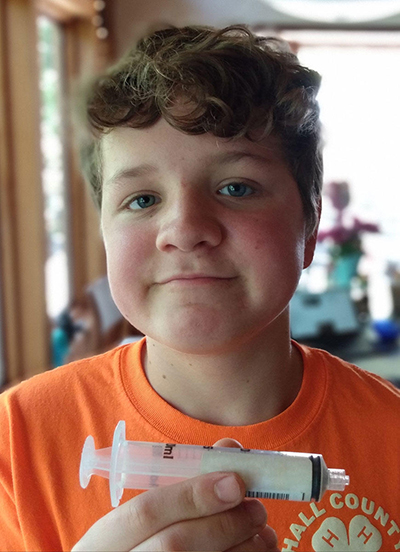 Phineas was treated for acute lymphoblastic leukemia at NCI. He is pictured here holding a syringe used to infuse his CAR T cells, and he has been cancer-free since 2013.
Photo courtesy of Phineas’ father, Carlos; NCI

A clinical trial led by CCR physician-scientists found that long-term survival for children, adolescents and young adults with relapsed or refractory B-cell acute lymphoblastic leukemia (B-ALL) was significantly better for patients who received CD19-chimeric antigen receptor (CAR) T-cell therapy followed by a stem cell transplant, compared to CAR T-cell therapy alone. The patients were followed for a median of close to five years, and the overall median survival rate was 10.5 months for the non-transplant group compared to 70.2 months for the transplant group. As a result, stem cell transplants are now recommended following CAR T-cell therapy. These findings appeared March 25, 2021, in the Journal of Clinical Oncology.

While this result and recommendations for transplant are specific to the particular CD19-CAR T-cell construct used in this trial, which has previously shown limited persistence, it does highlight the very important role of stem cell transplant for achieving a long-term cure.

Nirali N. Shah, M.D., M.H.Sc., NIH Distinguished Scholar and Lasker Clinical Research Scholar in the Pediatric Oncology Branch, helped lead this trial, which included 50 patients who averaged about 13 years of age. All patients were first treated with one of two chemotherapy combinations – fludarabine and cyclophosphamide or a non-fludarabine-cyclophosphamide combination – to destroy the body’s lymphocytes and T cells. Chemotherapy was then followed by CAR T-cell therapy, a process through which each patient’s T cells are genetically engineered to give them the ability to target a specific protein on a patient’s cancer cells.

Thirty-one patients out of the group of 50 achieved a full remission, with the fludarabine and cyclophosphamide chemotherapy combination more effective than other combinations tried. Twenty-one patients from the group of 31 who achieved full remission received stem cell transplants after the CAR T-cell treatment. Patients in this group had a median overall survival of about 70 months. The cumulative incidence of relapse following stem cell transplant was 9.5 percent at 24 months.

Shah is working to improve on the therapy regimen established by this trial. She is studying new chemotherapy combinations, as well as evaluating the persistence of different kinds of CAR T cells.

“This approach has tremendous potential in prolonging life among our young B-ALL patients,” she says. “Based on the data we have, a long-term cure may be possible.”