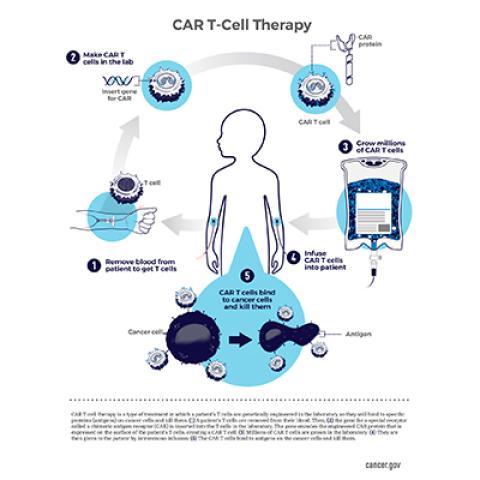 This schematic shows the steps for creating CAR T-cell therapy, an immunotherapy in which a patient's T cells are changed in a laboratory so they will attack cancer cells.
Photo courtesy of NCI Visuals Online

In August 2019, the U.S. Food and Drug Administration granted breakthrough therapy designation to an experimental immunotherapy being developed in the Center for Cancer Research (CCR) for the treatment of B-cell acute lymphoblastic leukemia (ALL), a type of blood cancer. The treatment, a cell-based immunotherapy that targets cancer cells bearing a surface molecule called CD22, is intended for children and young adults whose ALL has relapsed after or is resistant to immunotherapies directed toward another surface molecule, CD19.

Breakthrough therapy designation is designed to expedite the development and review of drugs intended to treat a serious condition where preliminary clinical evidence indicates the drug may demonstrate substantial improvement over available therapy.

CD22 CAR T-cell therapy addresses the need for a salvage therapy for patients who have relapsed after treatments designed to empower the immune system to recognize and destroy cells bearing CD19, a surface marker that is usually present on the surface of cancerous B cells in children with ALL. Many patients respond to these treatments, but cancer cells can evade them by losing the CD19 on their outer surfaces. Because of this, about 50 percent of patients treated with CD19-targeted therapies relapse.

To address this problem, former Pediatric Oncology Branch Chief Crystal Mackall, M.D., and members of her lab developed a CAR T-cell immunotherapy in which patients’ T cells are programmed to seek out an alternative marker on ALL cells, called CD22.CAR T-cell therapies use T cells that are equipped with a synthetic receptor, called a chimeric antigen receptor (CAR), that allows them to recognize their targets. In this case, the treatment involves isolating T cells from a patient’s blood, genetically manipulating them to recognize the CD22 marker and then allowing the reprogrammed cells to multiply to large numbers before they are administered to the patient.

The FDA granted the breakthrough therapy designation to the CD22-targeted CAR T-cell treatment based on data from an ongoingphase I trial being conducted at the NIH Clinical Center in Bethesda, Maryland. This study, the first-in-human, first-in-child trial of the new therapy, was initiated by former CCR Investigator Terry Fry, M.D., and then led by POB Investigator and NIH Lasker Clinical Research Scholar Nirali N. Shah, M.D., M.H.Sc. Using CAR T cells manufactured for each patient in the Clinical Center’s Center for Cellular Engineering, the trial is evaluating the treatment’s safety and effectiveness in children and young adults with relapsed or refractory hematologic malignancies whose cancer cells produce CD22.

More information about this study can be found at: