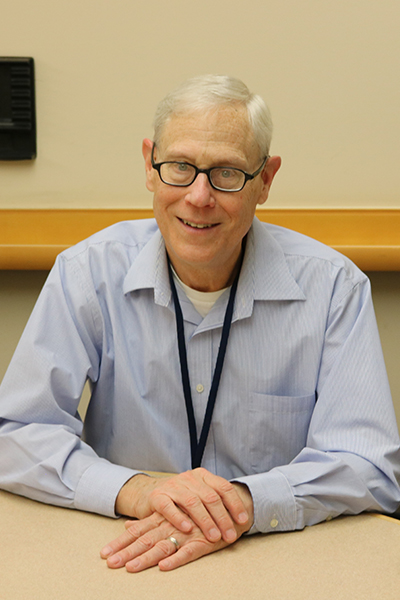 Tom during a visit at the NIH Clinical Center.
Photo credit: Chloe Gansen

People who say doctors make the worst patients haven’t met Tom, a retired surgeon who has brought extraordinary insight and empathy to his 14-year battle with prostate cancer.

An abnormal prostate exam in 2004 raised the first alarm. A subsequent blood test showed that Tom had rising levels of prostate-specific antigen (PSA), a protein produced by the prostate, a walnut-sized gland that sits just below the bladder in males. Rising PSA can be the first indicator of prostate cancer, so Tom’s doctor ordered a biopsy, which was indeed positive for cancer. “At that time, it was what I’d consider garden-variety prostate cancer,” Tom recalls, “the type most guys get. I’m a surgeon, so there was no question what I was going to do—have an operation. Get that bad boy out of there, be done with it and just go on with my life.” However, surgery to remove Tom’s prostate was just the first leg in a long, difficult journey.

Six weeks after surgery, further tests showed that Tom’s was a very aggressive tumor. “The radiation oncologists wanted to irradiate the area, but I was concerned that my cancer was so aggressive, it may have already spread to other parts of my body.” So, Tom and his doctor opted for a standard post-surgery regimen of chemotherapy and androgen-deprivation therapy (ADT). Androgens (male hormones) stimulate prostate cancer cells to grow. The goal of lowering androgens, particularly testosterone, is to make prostate tumors shrink or grow more slowly.

Tom went through six cycles of chemo followed by two years of ADT. At the end of those two years his hair had come back but shortly after so did his testosterone, and his PSA just kept rising. Scans showed no cancer beyond the area where his prostate had been, so in late summer 2008 Tom underwent radiation therapy. Finally, his PSA dropped to undetectable levels and stayed that way for the next four years. “I started to think that maybe I’d beaten this thing, but just before the five-year mark, my PSA was back and rising rapidly,” Tom says. “In fact, my PSA level increased by 100 percent in less than three months, so my prognosis wasn’t good.”

Tom turned next to immunotherapy, enrolling in a clinical trial at NIH. Unfortunately, his PSA continued to rise and after trying a second form of immunotherapy that only lowered his PSA for two months, another study at NIH was just starting to enroll patients.

The study Tom enrolled on in late summer 2016 is for men with metastatic castration-resistant prostate cancer. This means that the cancer has spread from its original point of origin and is no longer responding to drugs that suppress male hormones. “That’s the kind of cancer I had by this time,” Tom explains. “The cancer had spread to my bones and into my bladder and ureters. I had to have stents placed in both ureters to prevent urine blockage.”

The study is led by James Gulley, M.D., Ph.D., Chief of the Genitourinary Malignancies Branch in the Center for Cancer Research at the National Cancer Institute. The trial combines two different types of immunotherapy drugs. PROSTVAC is a vaccine designed to make the immune system recognize and attack cancer cells that express PSA. Nivolumab is an immune checkpoint inhibitor. As Tom explains, “Cancer sends up signals that tell the immune system, ‘I’m not something you need to worry about. Just ignore me.’ But nivolumab shuts down cancer’s ability to do that, so the immune system can get in there and attack the cancer and kill it.” Two weeks after receiving the study drugs, Tom started feeling more energetic. “I thought, ‘Wow! Something is going on here!’” But that wasn’t the only surprise. After three weeks, his PSA level had dropped by 80 percent, and three weeks after that it had dropped a further 80 percent.

In autumn 2017 a series of new scans showed a significant decrease in the size of Tom’s original tumor where his prostate had been and less active bone metastases. His PSA had also dropped to nearly undetectable levels, and there was no evidence of cancer in his bladder and ureters.

Tom is philosophical about his prognosis. Referencing his treatment, he says, “But even if they stop working someday, at least they’ve given me many months of energy and joyful living. This is beyond anything I could have hoped for.” These days he sees advising other prostate cancer patients about their options and what to expect from treatment as a form of service. “That’s my joy now. It’s what I went into medicine for.”

As for his experience at the Clinical Center, Tom describes Dr. Gulley and his team as “brilliant and compassionate.” For patients considering a clinical trial, his advice is to examine the risks and benefits. “There’s a lot of benefit to being in a trial at the NIH because the doctors here are totally focused on your medical care,” he says. “And as a patient, you’re helping to advance their knowledge.”