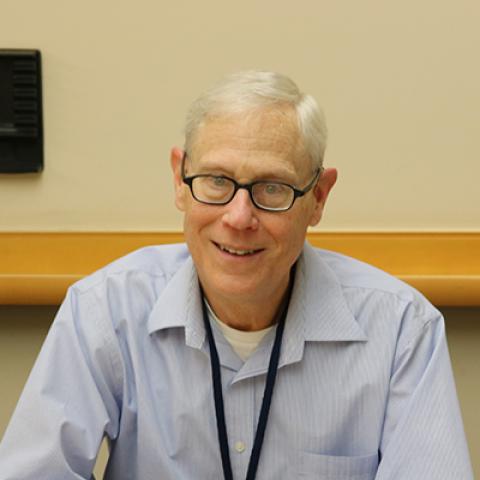 Tom during a visit at the NIH Clinical Center.
Photo credit: Chloe Gansen

In 2018, we interviewed Tom, a retired surgeon battling prostate cancer who, in 2016, enrolled on an immunotherapy clinical trial led by James Gulley, M.D., Ph.D., Co-Director of the Center for Immuno-Oncology. On the trial, Tom received a combination of two different immunotherapy drugs: PROSTVAC, a vaccine and nivolumab, an immune checkpoint inhibitor. He responded exceptionally well. “He had what we call a complete response, which is rare in prostate cancer,” says Dr. Gulley.

Three weeks after he first received nivolumab, Tom’s levels of prostate-specific antigen (PSA), a protein produced by the prostate and an indicator of prostate cancer, decreased substantially and eventually became undetectable. Tom remained on nivolumab for roughly a year and a half until he started to experience some side effects, so he stopped taking it. Now, five years since he first started on the trial, Tom only receives the vaccine every three months; his PSA levels have remained undetectable and his scans continue to come back clean.

Dr. Gulley and his team think they understand some of the reasons why Tom responded so well on the trial. “He was in the small group of patients with prostate cancer that have microsatellite instability,” explained Dr. Gulley. Microsatellite instability occurs when the genes that serve to regulate genetic mutations in our body end up with mutations themselves. It meant that Tom’s genes had many mutations that were not repaired. According to Dr. Gulley, this may have made it easier for the immune system to recognize something wasn’t right.

Recently, Dr. Gulley initiated a new trial to expand upon what he learned from the trial Tom was enrolled on. “We're still giving the vaccine plus immune checkpoint inhibitor, but we're giving it with something else to help boost the number and function of the immune cells. It's a cytokine called IL-15,” says Dr. Gulley. The trial is ongoing, and so far, many patients are responding well.

As for Tom, he feels incredibly blessed. In 2017, he wasn’t certain he would make it until Christmas, and now he’s gotten to experience five Christmases he wasn’t expecting. “The people at NIH are incredibly brilliant,” he says. “They learn from everything and continue to focus on what might work in the future.”

Today, Tom is passionate about working with others who are experiencing medical issues to help them navigate the system and advocate for themselves. “The joy of not feeling like every month is going to take away something from me is an incredibly freeing thing," he says.