Removing risk of stomach cancer for her daughter 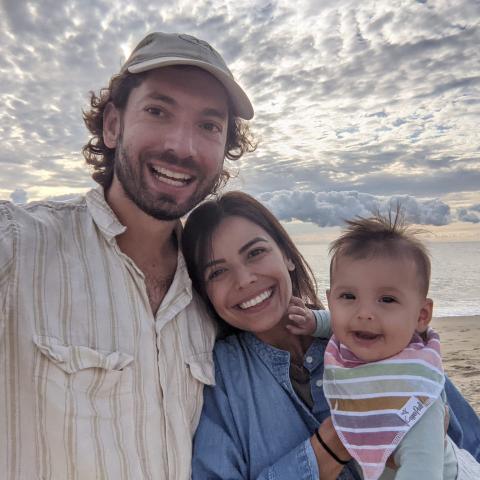 In late 2018, Estefania E. Marchan and her husband, Peter Richman, decided to start planning for a family. When Estefania’s obstetrician asked if the couple wanted to undergo cancer screening as part of the planning process, Estefania, who had a family history of stomach cancer, agreed.

“It was pretty obvious to me that it was going to be something that was hereditary,” Estefania said.

According to Jeremy L. Davis, M.D., Associate Research Physician in the Surgical Oncology Program, the relative rarity of stomach cancer in the U.S. can be attributed to improved food handling, such as the widespread adoption of food refrigeration, over the last century. However, stomach cancer remains difficult to treat.

“Stomach cancer is particularly deadly because it’s not very responsive to the treatments that we have,” said Davis, whose research focuses on sporadic and inherited forms of stomach cancer. “Although the disease is not common in the United States, it is very common throughout the world. And it's one of the leading causes of cancer death in the world because it's so hard to treat.”

Estefania’s genetic test confirmed that she carried a mutation for the CDH1 gene, a condition that significantly increases a person’s risk for developing hereditary diffuse gastric cancer. The service provider for Estefania’s genetic testing put her in contact with a counselor who identified a removal of her stomach — a total gastrectomy — as one of her treatment options.

“My husband and I had talked about what this would mean, and what this would mean for future children,” Estefania said. The stakes were high — her mother, grandfather, great-aunt and great-grandmother have all passed away from stomach cancer. Estefania and her husband quickly met with a number of physicians in the D.C. and Maryland area about the surgery, including Davis, who ultimately performed the total gastrectomy as part of the research program at the National Institutes of Health.

“This is different from a gastric bypass or a sleeve gastrectomy, where surgeons are not removing the stomach or only removing part of the stomach,” Davis said. “In this case, literally the entire stomach is removed.”

Surgeons then connect the patient’s esophagus directly to their small intestines. After recovering from the procedure, people who have had a total gastrectomy are able to eat many of the same foods as before, though they usually eat six to eight small meals throughout the day.

Patients who have undergone a total gastrectomy face additional difficulties during pregnancy, where good nutrition is essential for the health of the fetus. The new absence of anti-reflux mechanisms can also cause bile to surge up into the esophagus, causing discomfort and nausea. “As the baby grows, a lot of your intra-abdominal organs are displaced and pushed up and out of the way,” Davis said. “There's the potential for consequences, and we've seen that in a few people.”

For Estefania, the decision was easy.

“We thought my risk of having cancer was already even higher than what we liked, compared to the risk of us not being able to have a family of our own. We thought we could always adopt and so we were comfortable with the decision to move as quickly as possible,” said Estefania. “By January 31, 2019, I had no stomach anymore.”

As Estefania recovered, she transitioned from liquids to soft foods that were low in fiber and high in protein. Eventually, she was able to return to eating many of her favorite foods.

“By six months post-surgery, I was basically eating whatever I wanted, and eating normal amounts of food,” she said. “But I am a lot more careful. I still prioritize protein and I don't eat a ton of sugar. But I can eat ice cream!”

At the one-year mark, February 2020, Davis gave Estefania the green light to go ahead with the pregnancy. After a delay due to the onset of the COVID-19 pandemic, Estefania and her husband began the IVF process in June.

“We decided that we really wanted to go the IVF route because, through IVF and pre-implantation genetic testing, you can ensure that your children don’t have the CDH1 mutation,” Estefania said. “It was also considered a high-risk pregnancy due to the need for proper nutrition, which can be difficult following a total gastrectomy, so I had a maternal and fetal medicine doctor who focused on high-risk obstetrics, as well as my normal obstetrician. And then I really had a lot of support from the whole NIH team.”

In March 2021, Estefania gave birth to her daughter, Rafaela.

“My grandfather was diagnosed at a time when you couldn't even do genetic testing. They hadn't even actually confirmed that a mutation in CDH1 caused this cancer. By the time my mom had stomach cancer, they knew that a CDH1 mutation causes it, but there wasn't any extensive genetic testing available,” Estefania said. “I was really the first generation that could undergo the testing, surgery and IVF pregnancy, and now I have ensured that my daughter does not have to face the same risks that I did.”