Immunotherapy options for head and neck cancers abound at CCR 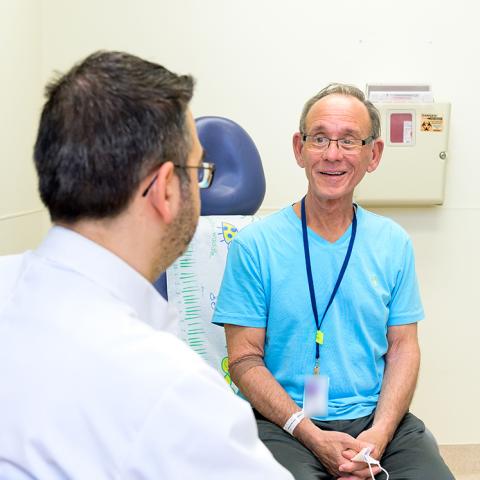 Cole Silver at the NIH Clinical Center for a check-up with Dr. Charalampos Floudas.

At CCR, many cancer patients are given second, third and even fourth chances to find a clinical trial that works for them. For Cole Silver, he hopes the fifth time is the charm.

In the spring of 2017, Cole discovered a lump in his neck. After a failed course of antibiotics, his doctor sent him to get an ultrasound and a needle biopsy at the nearby Thomas Jefferson University Hospital in Philadelphia. He received his diagnosis: head and neck cancer. A tumor on the base of his tongue had spread to the lymph nodes in his neck.

At the University of Pennsylvania (Penn), Cole proceeded with surgeries to remove the tongue and lymph node tumors. After he had chemotherapy and radiation treatment, his cancer went away. But two years later, it resurfaced, spreading further into the lymph nodes in his chest.

This time, instead of surgery or chemotherapy, Cole was interested in pursuing immunotherapy as a treatment option. “Chemotherapy can kill your healthy cells and negatively impact your immune system. I would rather reinforce my immune system and make it stronger to fight the cancer,” he says.

His doctors offered him the opportunity to join a clinical trial testing immunotherapy at Penn, but unfortunately, the treatment was not a good match and did not work well against his tumor. Then, his oncologist suggested that he look into joining a clinical trial at NIH.

Cole's main doctors at the NIH clinical center are Charalampos Floudas, M.D., D.M.Sc., M.S., Assistant Research Physician, and Julius Strauss, M.D., Associate Research Physician, in the Center for Immuno-Oncology. Their work explores the fundamental questions of cancer immunotherapy to develop novel therapies for cancer. “Our goal is to get the patient’s immune system to do its job and fight the cancer on its own,” says Strauss.

In 2019, Cole started out on a trial with an investigational checkpoint inhibitor, which prevents cancers from evading T cells that are trying to kill them. After a few years of success, Cole’s cancer stopped responding to the treatment. He then underwent three other immunotherapy trials that incorporated combinations of vaccines and interleukin-12 (IL-12) treatments.

“They gave me so many options,” Cole says. When one treatment stopped working for him, the doctors would promptly suggest another trial to try a different course of action. “The clinical team is caring and compassionate: they take a lot of time, and I never felt like just a name on a clipboard.” He especially recalls his positive experience with Dr. Floudas. “I have never met a more empathetic, compassionate and expert doctor than him. I completely trust him; I wish more doctors had his patient service and expertise.”

Floudas says that one of his priorities is being mindful of his patients’ travel requirements. “We have patients that come from various places, such as Cole, who has to travel from Philadelphia to Maryland to visit us. We try to have a flexible schedule, and we work with our patients’ specific requests and needs.” Cole is able to visit NIH when his time allows, even with the distance.

Cole’s tumors have unfortunately started growing again, so he is returning to Penn for chemotherapy before he can try enrolling in another trial. Strauss says, “even when we haven’t ‘cured’ a patient’s cancer, our trials can help their immune system fight so they might live longer or have a better quality of life while living with their cancer.” Cole hopes he will be able to return to the NIH soon and find a trial that’s right for him.

Words of advice from Cole

If you’re a patient and you’ve just received a diagnosis, Cole says it's important to take some time and do your research. “Know what options are out there for you. Being informed about your condition and treatment options is vital to pursuing something that works for you.”

If you’re a patient considering joining an NIH clinical trial, “it’s important to know that you are helping future cancer patients,” Cole says. He also says that it’s important to be on the cutting edge. “New things are coming out every day, and you never know if something might help you.”