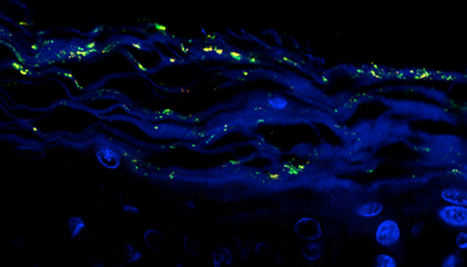 CCR scientists have discovered that a protein produced by bacteria that naturally inhabit our bodies may trigger the autoimmune disease lupus. Collaborators on the study included scientists from the Yale School of Medicine and Brigham & Women’s Hospital.

Although the causes of lupus are complex and involve both genetic and environmental factors, nearly all lupus patients produce antibodies against their bodies’ own normal proteins, sometimes years before they develop the disease. The earliest of these antibodies are against a protein called Ro60, which normally binds to RNA molecules in our cells. A research team led by Sandra Wolin, M.D, Ph.D., Chief of CCR’s RNA Biology Laboratory, and Martin Kriegel, M.D., Ph.D., Assistant Professor of Immunobiology at Yale School of Medicine, investigated whether proteins similar to Ro60 that are produced by the body’s natural bacteria can trigger the production of antibodies to human Ro60 in people genetically predisposed to developing lupus.

Their study, published March 28, 2018, in Science Translational Medicine, showed that bacteria collected from the gut, skin and mouths of healthy people and lupus patients produce a protein that is so similar to the human Ro60 protein that it is recognized by human antibodies. Experiments in mice confirmed that the bacterial version of Ro60 can trick the immune system into making antibodies against human Ro60.

The results of the study could unveil an entirely new set of drug targets for treating lupus and other autoimmune diseases, although a lot of work remains to be done. First, the bacterial species responsible for producing the errant Ro60 response need to be identified, and scientists must investigate whether other bacterial proteins that resemble Ro60 can produce a similar autoimmune response. Finally, drugs must be developed that specifically target the bacteria involved.