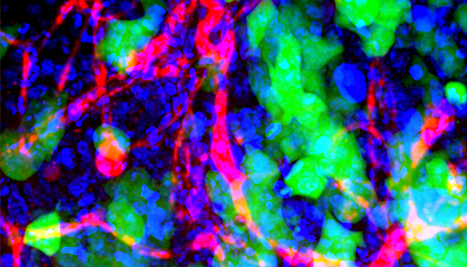 Scientists in the Center for Cancer Research (CCR) have found that cancers with mutations in key metabolic enzymes, called isocitrate dehydrogenases (IDHs), disrupt normal oxygen metabolism. This leads to a buildup of a byproduct known as reactive oxygen species, or ROS. About 80 percent of grade II/III gliomas, or brain tumors, have this mutation. After implanting human tumor cells into mice, the cancer cells from this preclinical model were shown to be responsive to a small molecule that inhibits the action of a protein that allows mutated cancer cells to survive. The study was published in the Journal of the National Cancer Institute on February 12, 2019.

ROS is a natural byproduct of normal oxygen metabolism. But stress, which can be brought on by IDH mutations, can cause ROS levels to rise dramatically, resulting in damage to cells.

“The effect of ROS on cells is similar to the corrosive nature of hydrogen peroxide on your fingers,” explained Chun Zhang Yang, Ph.D., Investigator in CCR’s Neuro-Oncology Branch. “This effect is activated by IDH mutations, which can change cell biology and predispose normal cells to cancer transformation.”

Yang and his team looked closely at NRF2, a protein that helps maintain oxygen balance in the cells, protecting them from damage. Because of oxidative stress, NRF2 initiates an antioxidative pathway, which allows the mutated IDH cells to survive production of an excess amount of ROS. Yang noted that IDHI-mutated cells become dependent on this pathway for their survival.  Furthermore, NRF2 has a particularly deleterious effect on glioma and has been associated with resistance to treatment and poor disease outcomes.

Using a mouse model, the researchers tried inhibiting NRF2 by introducing a small molecule called brusatol to cell lines with IDH-mutated glioma and fibrosarcoma, a type of cancer that attacks fibrous tissue. Brusatol had been shown to be an effective inhibitor in other experiments. “We found that brusatol potently suppressed NRF2 activity in IDH-mutated cells,” said Yang.  “Glioma cells were particularly responsive.”

Unfortunately, in its current formulation, brusatol may be too toxic for use in clinical studies.   Yang and his team are looking to modify its chemical structure to reduce toxicity and strengthen its effect on NRF2.

“Our findings introduce conceptual advances in the understanding of IDH-related malignancies,” added Yang. “Targeting NRF2 and relevant pathways could be a successful strategy for treating these types of cancer.”