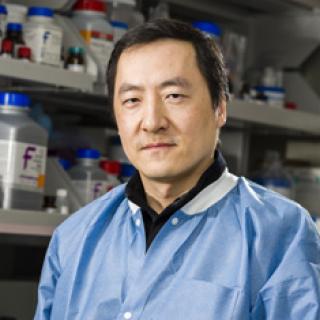 Dr. Dai's laboratory is a pioneer in the field of proteomic instability of cancer. The recent findings from his laboratory have revealed the intimate interactions between the proteotoxic stress response and RAS/MAPK-MEK signaling, cell cycle regulation, protein translation, as well as tumor-suppressive amyloidogenesis. His ongoing research focuses on the molecular mechanisms through which proteomic instability may affect genomic stability, cell invasion, and autophagy, areas which hold promise to unveil new molecular pathways that could be targeted in cancer
therapy.

We previously discovered that the heat-shock, or proteotoxic stress, response (PSR), an evolutionarily conserved cytoprotective mechanism, plays a key role in tumorigenesis. Following environmental insults, cells markedly increase production of heat-shock proteins (HSPs). HSPs are molecular chaperones, which protect the proteome against misfolding and aggregation by facilitating protein folding, trafficking, ubiquitination, and proteasomal degradation. The PSR is essential to proteome homeostasis, or proteostasis, and cell survival under stress. Heat shock factor 1 (HSF1) is the master transcriptional regulator of the PSR. Whereas HSF1 has been known to antagonize neurodegeneration and aging, our pioneering studies reveal that HSF1 is, surprisingly, a powerful pro-oncogenic factor. We showed that HSF1 plays an essential role in guarding the cancer proteome. Our results indicated that HSF1 depletion provokes proteomic chaos in cancer cells, causing proteome destabilization, aggregation, and tumor-suppressive amyloidogenesis. Importantly, we also showed that malignant cells, unlike their non-transformed counterparts, are particularly susceptible to proteomic perturbations and amyloidogenesis. Collectively, our findings suggest that proteomic instability is a characteristic inherently associated with malignant state, that cancer cells depend on the PSR for survival, and that disruption of cancer proteostasis may be an effective therapeutic strategy.

We are evaluating the therapeutic efficacy of combined MEK and proteasome inhibition in preclinical mouse models; we showed that this strategy inactivates HSF1 to potently perturb proteostasis and provoke amyloidogenesis in melanomas. These studies will not only illuminate “proteomic instability” and “addiction to the PSR” of cancer as new paradigms in cancer biology but also explore “disruption of cancer proteostasis” as an innovative anti-cancer therapeutic strategy.

Our recent studies have revealed a previously unappreciated phenomenon—tumor-suppressive amyloidogenesis. Amyloids, which are protein aggregates enriched for β-sheet structures and include Aβ, huntingtin, and islet amyloid polypeptide, are causally implicated in neurodegenerative disorders and amyloidosis. In contrast, little is known of tumor-suppressive amyloids. Interestingly, we have identified a number of candidate amyloids that are associated with human cancer. We are validating these previously unrecognized tumor-associated amyloids, and elucidating how amyloidogenesis impairs pro-oncogenic processes. Delineation of these mechanisms is essential to our comprehension and therapeutic exploitation of the amyloidogenic phenomenon of cancer.

Autophagy is a cellular stress response to nutrient deprivation and other insults. While HSF1 protects against proteotoxic stress, its role in nutrient stress remains unclear. Our new data reveal a key role of HSF1 in governing autophagy. We are delineating the underlying molecular mechanisms, and investigate whether HSF1 enables optimal organismal response to food deprivation. Elucidation of these mechanisms will causally associate proteostasis with autophagy, a process closely implicated in numerous human pathological conditions, including cancer and neurodegeneration. 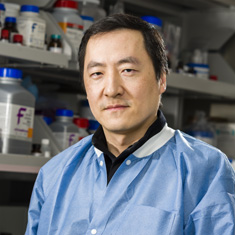 Dr. Dai received his medical and M.S. degrees from Tianjin Medical University, China. As a graduate student, he used mouse models to study gliomagenesis with Dr. Eric Holland at MD Anderson Cancer Center in Houston and Memorial Sloan Kettering Cancer Center in New York. After earning his Ph.D. degree from The University of Texas Health Science Center Houston in 2003, he worked with Dr. Susan Lindquist at the Whitehead Institute for Biomedical Research in Boston to study the role of the proteotoxic stress response in tumorigenesis. In 2009, he joined The Jackson Laboratory in Bar Harbor as an Assistant Professor and was promoted to Associate Professor in May 2016. In October 2016, he joined the Mouse Cancer Genetics Program (MCGP) as an Earl Stadtman Investigator. Dr. Dai received a Children’s Tumor Foundation Young Investigator Award in 2006, an Ellison Medical Foundation New Scholar in Aging Award in 2009, and a NIH Director’s New Innovator Award in 2010.

Congratulations on the tenure-track faculty positions of Drs. Kuo-Hui Su and Zijian Tang!