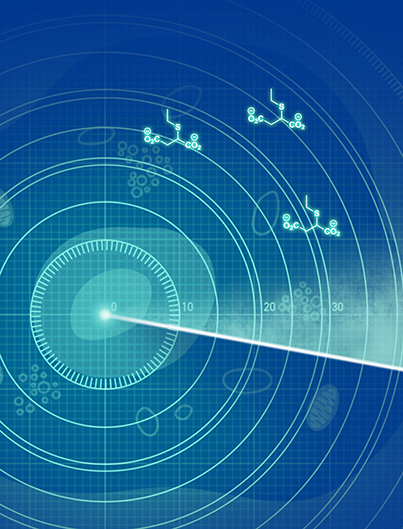 CCR researchers have identified more than 100 proteins that are altered by a cancer-promoting metabolite known as fumarate in the genetic cancer disorder hereditary leiomyamatosis and renal cell carcinoma (HLRCC). Their “map” of proteins provides new insights into how metabolism may influence tumor formation. The finding, led by Jordan Meier, Ph.D. Investigator, Chemical Biology Laboratory, appeared February 4, 2019, in Nature Chemical Biology.

Scientists have long known that metabolites play a role in cancer, ultimately helping the cells thrive. However, researchers have only started to unravel some of the mechanisms involved in this process. A particular mystery has been how some cancer metabolites, known as oncometabolites, influence gene expression and promote disease. Understanding how oncometabolites work could reveal new ways to target and disable cancer cells.

To gain more insights into how metabolism contributes to cancer, Meier and his colleagues studied HLRCC, a hereditary cancer disorder driven by a single oncometabolite: fumarate. In close collaboration with Marston Linehan, M.D., Chief, Urologic Oncology Branch, CCR, and Eranthie Weerapana, Ph.D., Boston College, they developed a strategy to map which proteins fumarate directly interacts with. Meier says, “If we could examine all the proteins in the proteome and determine the ones fumarate interacts with most strongly, we might discover new pathways that are disrupted by this oncometabolite.”

Researchers have known that fumarate reacts with proteins containing the amino acid cysteine to form strong, covalent bonds. Therefore, Meier and his team conducted a comprehensive screen of human proteins that contain cysteine, monitoring them for altered function in kidney cells with varying levels of fumarate. In total, the researchers identified more than 100 proteins that are altered when they are exposed to the oncometabolite. “Our results revealed that fumarate covalently modifies, or ‘sticks’ to many more proteins than previously assumed, some of which lie in important cancer signaling pathways,” says Meier.

In particular, the team found that fumarate binds strongly with a protein that forms part of the protein complex SWI-SNF, which is known to help suppress the formation of tumors. These results suggest that fumarate could alter the SWI-SNF complex in a way that facilitates the development of HLRCC. Exploring this possibility in greater detail, Dr. Meier’s team found that drugs known to be highly active when this complex is disrupted are more effective in cells with high fumarate. More research is needed, however, to determine whether this result can be harnessed as a new therapeutic approach in HLRCC.

Another important insight revealed through this research is that fumarate tends to bind strongly to proteins under more acidic conditions. This hints at the possibility that fumarate may become most reactive in cancers that display Warburg metabolism, which are characterized by a more acidic intracellular environment.

The insights gained here are prompting Meier and his collaborators in the Linehan lab to explore new avenues for HLRCC therapies, including drugs that are used to target cancers with a disrupted SWI-SNF complex, which may also prove useful for treating HLRCC.