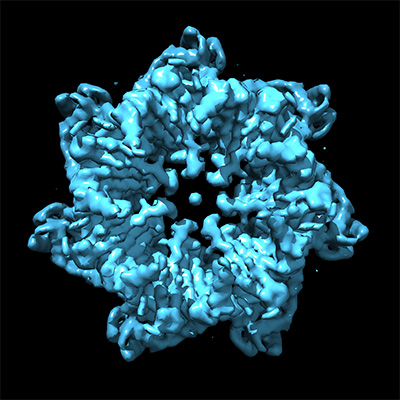 Researchers from CCR have shed light on the mechanism that allows a key protein, ISP, to be transported across a cell’s mitochondria, ensuring the successful assembly of Complex III. Using a mouse protein, researchers found that Bcs1 allows this transport to take place. Complex III, an important part of the respiratory chain, is where ATP and nutrients are converted into energy. These results were published in Nature Structural & Molecular Biology on February 10, 2020.

What is unique about ISP is that it has to be transported as a folded protein into the small space between the mitochondria’s inner and outer membranes. Unlike many other proteins, it cannot be unfolded and refolded while being transported across the mitochondrial inner membrane. Di Xia, Ph.D., Senior Investigator, Laboratory of Cell Biology, said that their work identified the machinery that makes this transfer possible.

“Biologists have known for a long time that ISP transport occurs as a folded protein, but we didn’t know how it worked,” said Xia. “What we discovered is that the protein Bsc1 is the machinery responsible for pushing ISP through the membrane in a folded state. “This is the first time such a mechanism has been revealed.”

Xia’s team took this finding one step further. They were able to map the locations of mutations on the Bcs1 protein to two diseases: GRACILE syndrome, which results in liver and kidney failure in young children, and the milder Bjornstead syndrome, which leads to hearing loss but has better overall outcomes.

This discovery potentially has numerous applications. For example, it may be possible to develop novel antibiotics against bacteria and fungi, especially in an agricultural setting. Xia is hopeful, too, that this research may someday be used for new anti-cancer therapies.

“Down the road, we may be able to target the respiratory chain for cancer treatment, but we also know that this approach may not be sufficient,” said Xia. “Cancer cells can bypass the respiratory chain by using glycolysis, a pathway that converts glucose into energy. But there is new research indicating that both pathways could be targeted simultaneously. That could be an effective way to kill cancer cells but much work needs to be done before we can explore the anti-cancer potential of this finding.”