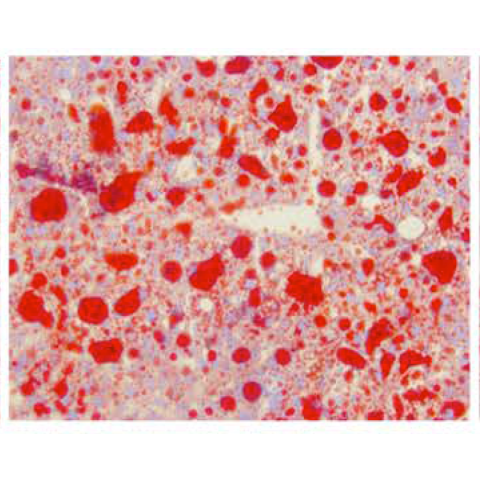 Histochemical staining of liver tissue from a mouse that was fed nicotine. The large amount of fat deposits (red) is characteristic of fatty liver.

Researchers from CCR and Peking University in China have found a strain of nicotine-metabolizing bacteria in the human gut that decreases the risk of non-alcoholic fatty liver disease in mice. This collaborative work provides the first links between nicotine-initiated signaling in cells of the intestinal lining and fat production, inflammation and fibrosis in the liver. Their research, published October 19, 2022, in Nature, offers valuable insight into smoking-related non-alcoholic fatty liver disease.

Non-alcoholic fatty liver disease (NAFLD) is the most common chronic liver condition in the United States, affecting about a quarter of the adult population. Smoking is a known risk factor for the disease, which is characterized by fat buildup in the liver and possible progression to more serious liver inflammation. The best way to reduce these effects of smoking is to quit or never smoke. “Fatty liver disease is largely asymptomatic, and people don’t know they have it,” says Frank J. Gonzalez, Ph.D., Senior Investigator in the Cancer Innovation Laboratory. “People only become symptomatic once the liver is being destroyed, which can lead to cancer or even liver failure.”

Gonzalez’s former postdoctoral fellow, Changtao Jiang, M.D., Ph.D., currently a professor at Peking University, Beijing, China, identified a type of bacteria found in the human gut that can naturally metabolize nicotine in tobacco. He found that nicotine accumulates in the intestine during smoking and that the presence of the bacteria decreases the risk for smoking-related NAFLD progression. When Jiang reached out to collaborate, Gonzalez knew that together they could explore the association between nicotine and NAFLD progression on a deeper level, so they expanded the research into animal models in his CCR laboratory.

“What we have done at NCI is contribute to the mechanistic work in mice to determine how nicotine influences NAFLD progression,” Gonzalez says. The team found that nicotine directly activates a protein called AMPK in the intestines; this protein modifies and stabilizes another protein called SMPD3. Ultimately, the stabilization of SMPD3 results in the production of specialized lipids, called ceramides, that accumulate in the liver and promote NAFLD progression. In the team’s study, the nicotine-metabolizing bacteria discovered by Jiang prevented excess ceramide production and led to a delay in NAFLD progression in nicotine-fed mice.

“For many years, drug companies have been trying to target ceramide metabolism, but ceramides play important roles all over the body,” Gonzalez explains. “However, AMPK or SMPD3 inhibitors that work only in the intestines could potentially prevent the type of ceramide production that leads to these diseases and cancer.”

Gonzalez’s collaborators in China will continue to study the nicotine-metabolizing bacteria and liver disease in the clinic while his team will explore other functions of AMPK in the liver and intestines using mouse models. “These multi-institutional collaborations with studies that originate in humans and move to animal models to answer mechanistic questions are of great value,” Gonzalez adds.