New finding reveals how some cancers gain or lose chromosomes 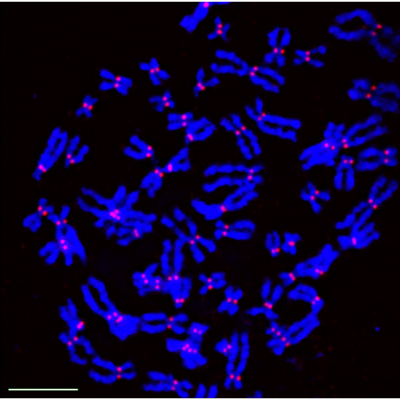 In human cells, CCR researchers have discovered how overexpression of just one protein can lead to the formation of a cell with an abnormal number of chromosomes – a hallmark feature of some aggressive cancers that are associated with a poor prognosis. The findings published Feb. 23, 2021, in the Journal of Cell Biology.

Chromosomes are carefully packaged sequences of DNA that must remain stable and consistent throughout the cell cycle as each set of chromosome pairs is separated, replicated and reassembled. “Faithful segregation of all chromosomes during cell division is an essential attribute of every living cell,” explains Munira A. Basrai, Ph.D., a Senior Investigator in CCR’s Genetics Branch. “Errors in chromosome segregation contribute to chromosomal instability, leading to the gain or loss of chromosomes, which is known as aneuploidy.”

Basrai’s past research in budding yeast cells has shown that mislocalization of an overexpressed centromere-associated protein, called CENP-A, causes chromosomal instability. Overexpression of CENP-A is seen in several cancers, including triple-negative breast cancer, colorectal cancer, prostate cancer, and is associated with a poor prognosis. However, the molecular consequences of CENP-A overexpression in cancers have not been investigated.

In this recent study, Basrai and her colleagues discovered how mislocalization of overexpressed CENP-A causes aneuploidy in cancers. The researchers induced overexpression of CENP-A in human colorectal cancer cells and found that this led to the mislocalization of important proteins that comprise the kinetochore – which acts as a scaffolding base for chromosome segregation – thereby weakening the kinetochore. Aneuploidy occurred as a result.

In a companion part of the study, tumors that were induced to overexpress CENP-A in mice showed mislocalization of this protein and substantially more chromosome abnormalities than tumors in control mice.

Roshan Shrestha, Ph.D., a Research Fellow involved in the study, compares CENP-A to bricks that form a building’s foundation. “There is a hierarchy to the brick structure, and if CENP-A is overexpressed and abundant in the wrong locations, it takes with it other proteins to these sites and this causes the whole foundation of the building to be faulty, resulting in chromosome segregation errors,” he says.

“Our results explain why CENP-A overexpressing cancers have poor prognoses and are difficult to treat,” Basrai says. She plans to further investigate what mechanisms drive the overabundance and mislocalization of CENP-A, and consequently weaken the kinetochore in yeast and human cells. A better understanding of these mechanisms could one day lead to more targeted therapies for cancers associated with chromosomal abnormalities.