Dr. Basrai’s research focuses on the molecular mechanisms for faithful chromosome segregation in budding yeast and human cells. Her group uses multi-organismal (yeast, mouse and human cells) and multi-disciplinary (genetic, cell biology, biochemical and genome-wide) approaches to identify and characterize pathways that prevent chromosomal instability (CIN) an important hallmark of cancers. Basrai laboratory has characterized the role of centromere binding proteins and provided mechanistic insights into how acetylation, phosphorylation, sumoylation and ubiquitination of centromeric histone H3 variant, Cse4,(CENP-A in humans) and H4 regulate chromosome segregation. They have shown that mislocalization of Cse4 to non-centromeric regions leads to CIN in yeast and extensive use of genome-wide screens has identified pathways that prevent mislocalization of Cse4 to prevent CIN. Mislocalization of CENP-A is observed in many cancers. Her group has established that mislocalization of CENP-A contributes to CIN and aneuploidy with karytotypic heterogeneity in human cells and xenograft mouse model. These studies provide critical insights into CIN and will allow translation of basic science research to the clinic and aid in the diagnosis, prognosis and treatment of cancers such as those that overexpress CENP-A.

Chromosomal instability (CIN) is a hallmark of many cancers and a major contributor to tumorigenesis. CIN is characterized by unequal distribution of chromosomes into two daughter cells (numerical CIN) and/or structural rearrangements of the genome (structural CIN). Under selective conditions, CIN results in aneuploidy, which is observed in 90% of solid tumors. One of the key determinants for chromosomal stability is the centromere which serves not only as a site for kinetochore (centromere DNA and associated proteins) assembly but also a locus for kinetochore-microtubule (KT-MT) attachments and spindle assembly checkpoint function. Despite the differences in DNA sequences and size, all eukaryotic centromeres contain an evolutionary conserved histone H3 variant (CENP-A in humans, CID in flies and Cse4 in budding yeast). Restricting the localization of CENP-A is essential for faithful chromosome segregation. Mislocalization of CENP-A and its homologs to non-centromeric regions contributes to aneuploidy in yeast and flies. The proliferation of cancer cells is caused by dysregulation of evolutionarily conserved fundamental processes such as cell cycle control and chromosome segregation. The high degree of conservation between S. cerevisiae and human genes makes budding yeast an invaluable tool for cancer research and allow us to molecularly dissect the interplay between centromeric chromatin, cell cycle regulation, gene dosage, and chromosomal stability. Our research is focused on understanding the assembly and regulation of centromeric chromatin for faithful chromosome segregation. We have pioneered studies in these areas and our recent results show that a balanced stoichiometry of kinetochore proteins, topology of centromeric chromatin, post-translational modifications of centromeric histones and preventing the mislocalization of Cse4 to non-centromeric chromatin are essential for faithful chromosome segregation in budding yeast. Extrapolation of findings from yeast to humans shows that mislocalization of CENP-A contributes to CIN in human cells.

We use multi-organismal (yeast, mouse and human cells) and multi-disciplinary (genetic, cell biology, biochemical and genome-wide) approaches to study faithful chromosome segregation, a fundamental process of every living cell. Genetic screens served as a starting point and in-depth mechanistic studies have provided evidence for new roles for kinetochore genes and the identification of new kinetochore genes. We also identified and defined roles for post-translational modifications (acetylation, methylation, phosphorylation, sumoylation and ubiquitination) of Cse4 in chromosome segregation. Our current research is aimed at understanding the role of Cse4-associated proteins in chromosome segregation and defining pathways that prevent mislocalization of Cse4 to non-centromeric regions.

Dr. Basrai received her Ph.D. from the University of Tennessee at Knoxville and did her postdoctoral research with Dr. Philip Hieter in the jDepartment of Molecular Biology and Genetics at Johns Hopkins University School of Medicine in Maryland. Dr. Basrai joined the Genetics Branch at the NCI in 1998 and was promoted to tenure in 2006.  Her research interests are genome stability and cell cycle regulation in yeast and human cancers.  Dr. Basrai  co-chairs the Cell Cycle Interest Group since 2005 and serves on the steering committee for the Center of Excellence of Chromosome Biology (CECB) since 2007.  Dr. Basrai served on the Cancer Advisory Board for three years (2008-2011). Dr. Basrai  has received the NIH Director’s Award and the NIH Award for Outstanding Mentorship towards the education of post-baccalaureate trainees. Her trainees have recieved numerous awards such as NIH Fellows Award for Excellence in Research and exceptional pay increase. 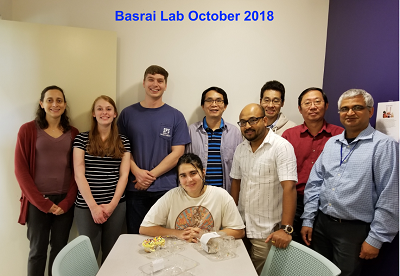