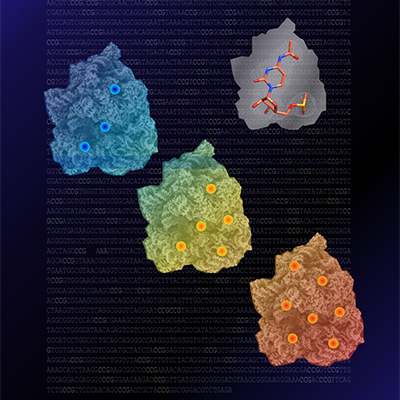 The upper right of the graphic depicts the chemical structure of the RNA modification, ac4C. The blue, yellow and orange objects from top left to bottom right depict cryo-EM structures of an extremophile ribosome, with sites at which ac4C increases at higher temperatures marked with circles.
Image credit: Aldema Sas-Chen, Weizmann Institute

Researchers have developed a novel chemical reaction that allows the quantitative mapping of an RNA modification across the evolutionary spectrum, from primitive microorganisms to humans, providing new insights into its potential role in cancer. These results, led by CCR and an international research team including the co-lead authors at the Weizmann Institute of Science, Rehovot, Israel, appeared June 17, 2020, in Nature.

The four bases that comprise RNA can be chemically modified in over 100 ways, allowing them to carry out many functions required for normal cell growth or, alternatively, cancer. One of the most ancient of these is N4-acetylcytidine (ac4C), an RNA modification found in almost all organisms on earth. Aberrant function of the human gene that produces ac4C, NAT10, has been implicated in cancer and premature aging syndromes. However, understanding the role of ac4C in cancer biology has been difficult due to a lack of methods to understand precisely where it occurs and to what extent any given RNA is modified.

This problem led Jordan L. Meier, Ph.D., Senior Investigator in the Chemical Biology Laboratory, and his team at CCR to develop a new chemical reaction that causes a specific signal to be generated at ac4C-containing sites. The high efficiency of the reaction results in quantitative conversion, allowing the scientists to identify the dominant sites of this modification in human cancer cell lines using RNA sequencing technology. To better understand not just where ac4C occurs but what it may be doing, they extended their chemical sequencing technique to a wide range of organisms, including those that grow at extreme temperatures. Here, their quantitative measurements found ac4C levels increase with temperature. “This suggests ac4C may increase the physical stability of RNA,” says Meier.

In addition to informing biological studies of ac4C in cancer, the researchers believe their work may also have biotechnology applications. “We think the chemical insight that helped us sequence ac4C may have applications in studying other nucleic acid modifications as well,” notes Meier. Furthermore, RNA modifications are a key component of many messenger RNA vaccines that are in development for diseases such as cancer and the emerging viral pathogen SARS-CoV-2. “Understanding what RNA modifications do and how to manipulate them might allow us to improve the function of these therapeutic agents in the future,” concludes Meier.