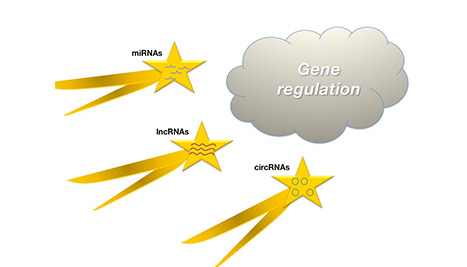 MicroRNAs block the activity of specific genes by binding to the messenger RNAs that relay a gene’s information to the cell’s protein-making machinery. To recognize its targets, each microRNA relies on a stretch of seven nucleotides (genetic letters) within its own sequence that binds to a complementary sequence in messenger RNA, a segment known as the microRNA’s seed.

Uridylation, which adds a string of Us to the 22-nucleotide sequence that makes up a microRNA, does not alter the seed, so researchers had not expected it to impact the gene regulators’ target recognition. Instead, the modification was thought to be primarily a way for cells to control the stability and abundance of specific RNAs. Still, Gu says, changes in the levels of sequence-modified microRNAs have been linked to cancer, suggesting they may play an important role in the disease process.

Based on the features they determined were necessary for this tail-assisted pairing, the team predicted that uridylation could allow a microRNA to interact with hundreds of new genetic targets. Now, they plan to explore how healthy cells use this shift to control normal processes as well as uridylated microRNAs’ role in disease.