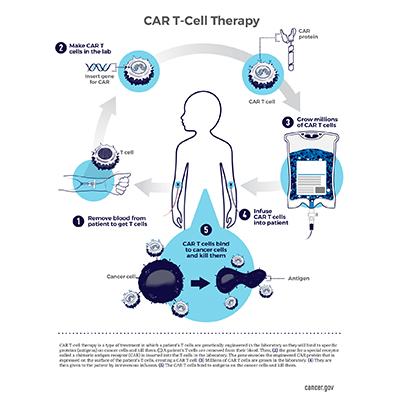 CAR T-cell therapy: A patient’s T cells are modified in the laboratory so they will find and destroy cancer cells.
Image credit: NCI Visuals Online

A cell-based immunotherapy that is currently being evaluated at the NIH Clinical Center for the treatment of B-cell acute lymphoblastic leukemia (ALL) has been designated by the U.S. Food and Drug Administration as a drug for a rare pediatric disease.

The experimental treatment, which was developed in the Center for Cancer Research, is a type of CAR (chimeric antigen receptor) T-cell therapy in which patients’ immune cells are programmed to destroy cells with a surface marker called CD22. It is intended for children and young adults whose ALL has relapsed after or is resistant to immunotherapy directed toward another surface molecule, CD19.

ALL is the most common childhood cancer and one of the leading causes of childhood cancer-related mortality. But with only around 6,000 cases of ALL diagnosed in the United States each year, it is considered a rare disease.

CCR is committed to advancing treatment for ALL and other rare cancers. Testing new therapies and bringing them to market can be costly, and the new designation from the FDA offers an incentive to potential partners to work with NCI to expand testing and continue developing the new CAR T-cell therapy.

“When you are dealing with pediatric diseases, you are often dealing with small numbers of patients,” says Nirali N. Shah, M.D., M.H.Sc., Investigator in CCR’s Pediatric Oncology Branch and NIH Lasker Clinical Research Scholar. To encourage the development of new drugs for these diseases, the FDA’s rare pediatric disease program awards priority review vouchers to sponsors of certain drug applications, which the sponsor can use for priority review of another product. The designation is for therapies that target a rare disease that primarily affects individuals less than 18 years of age.

In 2017, the FDA approved the first CAR T-cell therapy for B-cell ALL, tisagenlecleucel (Kymriah). That treatment has been effective for many children, but because cancer cells can stop producing CD19, relapse is common. CCR scientists led by Crystal Mackall, M.D., former Chief of the Pediatric Oncology Branch, developed CD22 CAR T-cell therapy as an additional therapy choice for those patients. Like all CAR T-cell therapies, the experimental treatment involves isolating T cells from a patient’s blood, genetically manipulating them to recognize their targets, then administering the reprogrammed cells back to the patient.

The safety and effectiveness of the treatment is being evaluated in an ongoing trial initiated by former CCR Investigator Terry Fry, M.D., and now led by Shah. Based on early results from that trial, in 2019 the FDA granted the treatment a breakthrough therapy designation, which allows for its expedited development and review. In January 2020, the research team reported in the Journal of Clinical Oncology that 70 percent of the 58 patients with B-cell acute lymphoblastic leukemia who had been treated so far experienced complete remission of their cancer. The trial remains open to children and young adults with relapsed or refractory hematologic malignancies whose cancer cells produce CD22.