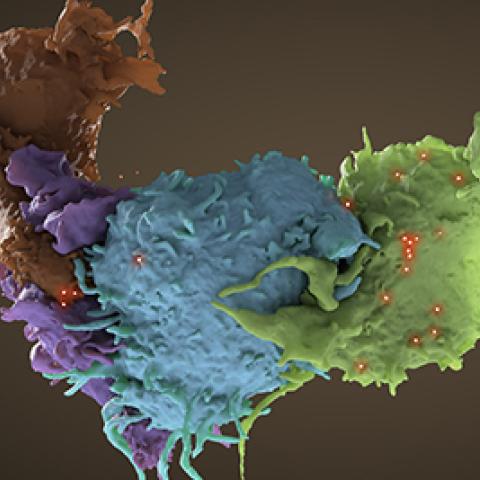 CCR investigators have discovered that HIV-1, the form of the virus responsible for most HIV infections, can overcome blocks to virus replication—including those induced by antiretroviral therapy—by acquiring mutations in the envelope glycoprotein (Env) on the surface of the virus. These findings appeared in Proceedings of the National Academy of Sciences on April 11, 2019, and may have implications for HIV-1 drug resistance.

HIV-1 infects T cells and other disease-fighting immune cells, spreading from one cell to another through two mechanisms. In cell-free infection, a viral particle is released from an infected cell, and diffuses through the extracellular space until it binds and infects a target cell. In cell-to-cell transmission, known to be more efficient than cell-free infection in culture, virus particles are released at regions of close contact between an infected cell and an uninfected cell, enabling direct delivery of the virus to a new target cell.

Researchers led by Eric Freed, Ph.D., Director, HIV Dynamics and Replication Program, introduced HIV-1 that had mutations in p6, a protein that promotes virus release, into human T cells in culture. The mutations caused delays in HIV-1 replication, but eventually the replication activity returned to normal. Freed’s team then saw that the p6 mutants had acquired mutations in Env, a protein on the surface of HIV-1 involved in initiating new infections. Additional tissue culture experiments demonstrated that the Env mutations correct the replication defects caused by p6 mutations. In trying to understand how the Env mutations can mediate this rescue, the researchers found that although the Env mutations reduced the ability of the virus to engage in cell-free infection, they greatly increased the ability of the virus to spread through cell-to-cell transmission compared with non-mutated HIV-1.

Sure enough, when they treated human T cells in culture with the integrase inhibitor dolutegravir (Tivicay), the Env mutations corrected the resulting replication defects. Next, they infected human T cells with HIV-1 that expressed a green fluorescent protein and treated the cells with dolutegravir. Cells containing HIV-1 with compensatory Env mutations glowed brighter than those infected with non-mutated HIV-1, indicating that these mutations boost the efficiency of cell-to-cell transmission and likely increase in the number of viral genome copies integrated into the host genome.

“Clearly, these envelope mutations are able to reduce the susceptibility of HIV-1 to anti-retroviral drugs in tissue culture,” Freed says. “What we don’t know is whether this occurs in people.”

He and his team have begun analyzing HIV-1 genome sequences from patients whose virus no longer responded to anti-retroviral therapy to investigate whether analogous Env mutations are developing in them and contributing to resistance.