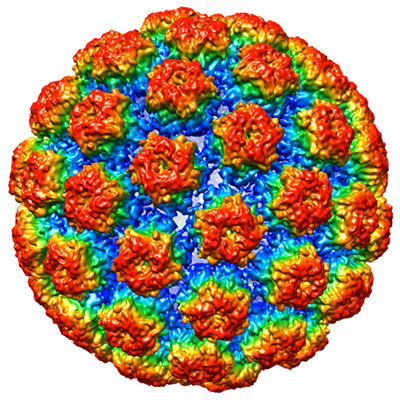 A depiction of the human papillomavirus 16, which is associated with the development of cervical cancer.
Image courtesy of Christopher Buck

A team of researchers on the hunt for two specific types of virus ended up creating a valuable tool for easily adding viruses to the database GenBank. Their efforts resulted in identifying and cataloging thousands of previously unknown viruses and could one day help identify viruses that are associated with cancer and other diseases. Their work was published February 4, 2020, in eLife.

Christopher Buck, Ph.D., a Senior Investigator in CCR’s Laboratory of Cellular Oncology, and his team originally analyzed “virome” samples from 70 animals in the hope of better understanding two types of viruses that are associated with cancer, polyomaviruses and papillomaviruses. As they sought to isolate these viruses, they uncovered many more DNA sequences than they bargained for.

“In the end, the goal was to catalogue this very narrow spectrum of viruses in animals,” explains Buck. “But we saw very strange, new varieties of exotic viruses that people hadn’t reported before.”

Buck’s graduate student, Michael Tisza, saw an opportunity to share the large number of new viruses through the GenBank database and set out to create a new tool for cataloguing these previously unknown viral sequences. The tool, called Cenote-Taker, is freely available online for others to use.

Cenote-Taker was used to automatically annotate more than 2,500 complete genomes, revealing dozens of new viral families. The researchers were surprised to find completely new combinations of viral genes that have never been seen before. For example, despite the fact that these viruses were DNA-based, some genes appear to have been stolen or acquired from RNA viruses.

Buck says that he hopes more researchers will choose to add their data to GenBank or other public databases. “If you don’t know that a virus exists and you don’t know its sequence, there’s no way that you’re going to know if it causes cancer,” he notes.

Moving forward, his team plans to apply Cenote-Taker to additional datasets in the hopes of cataloguing even more viruses. “I think these tools can increase the sharing of data in an appropriate way. It’s just going to accelerate the rate at which we’re finding these new viruses,” says Buck.