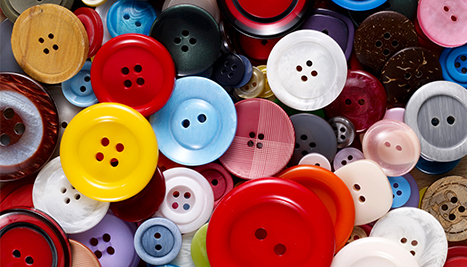 Although all the objects shown in this photo are buttons, they vastly differ in their appearance. In much the same way, while all cells contain the same genomes, their appearance—that is, their 3D configuration—varies greatly from one cell to the next.
Photo credit: iStock

To squeeze into the tiny nucleus of a cell, DNA is tightly wrapped around proteins to form a complex, known as chromatin, that resembles beads on a string. These chromatin fibers, in turn, form loops and chromatin domains that become compacted into chromosomes. Now, a new study, published in Cell on February 21, 2019, highlights a surprising level of variability in this 3D organization from one cell to the next.

Researchers led by Tom Misteli, Ph.D., Director of the NCI Center for Cancer Research and Senior Investigator in the Laboratory of Receptor Biology and Gene Expression, asked how similar the configuration of chromatin between individual cells is. They used high-throughput imaging methods, which allow visualization of hundreds of chromatin interactions in a single experiment, to measure the frequency of physical associations between more than 100 chromatin regions in single human fibroblasts. They found that any given interaction between two chromatin regions occurred only rarely in a population of cells, indicating that the configuration of chromatin differed greatly from one cell to the next. These findings challenge the common view, mostly derived from commonly used biochemical experiments, that genomes are organized identically amongst individual cells.

Misteli and his team also uncovered heterogeneity inside a single cell. When they compared the behavior of two copies of the same gene in a nucleus, one inherited from each parent, they found that they behaved independently of each other.

The research is interesting in light of earlier studies that suggested that chromosomal rearrangements, when fragments of chromosomes break off and reattach to different chromosomes, contribute to cancer and commonly occur at the bases of chromatin loops. Understanding the configuration of chromatin could therefore help shed further light on the mechanisms of cancer.