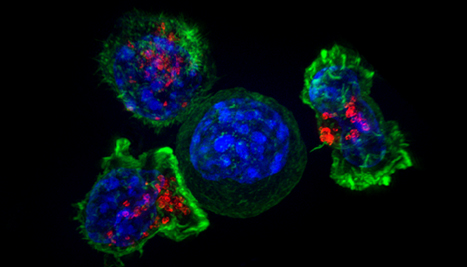 A new, early-phase clinical trial has established that the immunotherapy agent tremelimumab, combined with microwave ablation therapy, is safe for patients with advanced biliary tract cancer (BTC). The results, published December 22, 2018, in Hepatology, mark an important stepping stone toward pinpointing which patients may benefit most from a combination of a new class of immunotherapy drugs called immune checkpoint inhibitors with radiation therapy.

Tim Greten, M.D., Deputy Chief of the Thoracic and GI Malignancies Branch, has been studying the efficacy of tremelimumab and microwave ablation therapy in patients with a type of primary liver cancer called hepatocellular carcinoma (HCC). BTC occurs in close proximity to the liver in the tubes that help drain bile from the organ. “We saw encouraging results when we treated patients with HCC, so we amended our study and also included patients with biliary cancer,” he explains.

Twenty patients with advanced disease were enrolled in the phase I/II clinical trial for BTC between March 2015 and December 2016. They were given an initial intravenous dose of the immunotherapy drug and then 36 days later received microwave ablation, a procedure where microwaves are used to heat and destroy cancer cells. Therapy with tremelimumab was continued in the following months. The underlying concept for this combined approach is that the ablation helps destroy the cancer cells, releasing cancer-specific proteins and exposing these proteins to the immune system. The application of the immunotherapy drugs then further boosts the immune system’s ability to target cancer.

The most common side effects from the treatment were low white blood cell counts, diarrhea and elevated transaminases (which is an indication of liver damage), but no patients experienced life-threatening side effects, suggesting that this treatment is safe for patients with BTC.

“We showed that this combination is safe and can yield significant outcomes in a small portion of patients,” says Greten. However, he notes thatthe sample size in this trial was small because it was only intended to establish that this combination of therapies is safe for patients; tremelimumab does not yet have FDA approval but has orphan drug status. Further studies are needed to find the ideal treatment for BTC and pinpoint the underlying reason for why the two patients in this study responded well to the tremelimumab and ablation therapy combination.