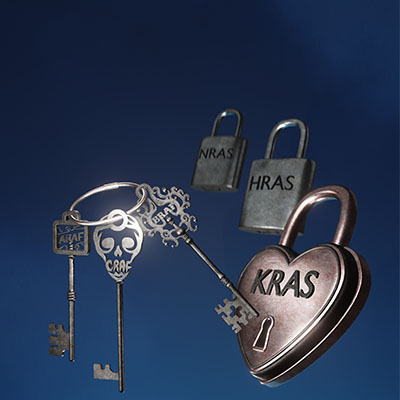 Using living cells, researchers in CCR have found that a set of enzymatic proteins, known as Raf kinases, have differing affinities in how they bind to a class of cancer-related proteins, known as the Ras GTPases. The findings, from Deborah K. Morrison, Ph.D., Chief of the Laboratory of Cell and Developmental Signaling, and colleagues, appeared December 19, 2019, in Molecular Cell.

Human cells have three different Raf kinases (A, B and C-Raf), and three different Ras members (H, K and N-Ras), and scientists have known that Ras regulates Raf activity to send signals that promote cell growth. Alterations in Ras signaling can lead to disease, including cancer and certain developmental disorders, when genes encoding Ras or Raf proteins are mutated. Most significantly, disease-related mutations can lock Ras into a constitutively active state resulting in continuous cell growth and tumor formation.

Using a technique known as bioluminescence resonance energy transfer (BRET), Morrison and colleagues determined the ability of individual Raf enzymes and Ras proteins to interact with one another in laboratory cultures of live human cells. Most prior research studying Ras and Raf binding had used purified proteins or samples extracted from cells, thereby limiting the understanding of this complex biological interaction. In this new study, the scientists uncovered a set of specific binding preferences that could impact cancer progression and potentially alter how a cancer cell responds to targeted therapies.

The investigators were able to pinpoint specific aspects of Raf and Ras binding that were unique, defining regions in each of the proteins that are responsible for the observed binding preferences. Most notably, they found that B-Raf strongly preferred binding to K-Ras over other Ras family members. This binding pair, K-Ras and B-Raf, also represents the most frequently mutated members of their respective families.

The researchers are now using BRET technology to screen for compounds that disrupt, either directly or indirectly, the Ras/Raf interaction in live cells. This approach could offer new strategies for developing more effective targeted therapies.