We are investigating connections between inflammation, microRNAs, metabolome, microbiome and cancer using a precision medicine strategy. Molecular mechanisms of microRNAs and cytokines associated with human cancer diagnosis, prognosis, and therapeutic outcomes are being investigated. Gene-environment interaction is a seminal concept in the molecular epidemiology of human cancer; our ongoing studies include lung, colon and esophageal cancer. Cellular senescence is a tumor suppressive mechanism that can be activated by p53. We are focused on both the integrative p53 and microRNA networks in tumor suppression and the functional role of p53 isoforms, as natural regulators of cellular senescence and stem cell biology and their dysregulation in cancer and aging.

Biomarkers are the foundation upon which diagnostic precision is improved and comprise potential therapeutic targets. Our Biomarker program emphasizes the integration of molecular, clinical, and environmental data for single patients to identify lung, esophageal, liver and colon cancer biomarkers and build a molecular taxonomy that will result in improved cancer diagnosis and treatment. We are focused on the earliest stages of cancer; when therapy is most effective but a subset of patients remain at high risk of recurrence. Our strategy is to begin by analyzing resources from our NCI-MD cohort and then validate those findings in multiple clinical cohorts throughout the world, to find associations that are generalizable to cancer populations globally and to uncover biological factors of health disparity. Through rigorous bioinformatics and statistical analyses of molecular data, including mRNA and miRNA, DNA methylation, inflammatory cytokines, tumor microbiome and tumor and urinary metabolites, together with clinical and environmental exposure data for single patients, we develop signatures of cancer risk, diagnosis, prognosis, and therapeutic outcome. The integration of classifiers across different data types within a given disease generates hypothesis, illuminates novel disease mechanisms, and provides actionable information to guide medical decisions for cancer patients. We are also investigating the lung cancer microbiome to determine its value as cancer biomarker and to understand the role of the microbiota in cancer initiation and progression. 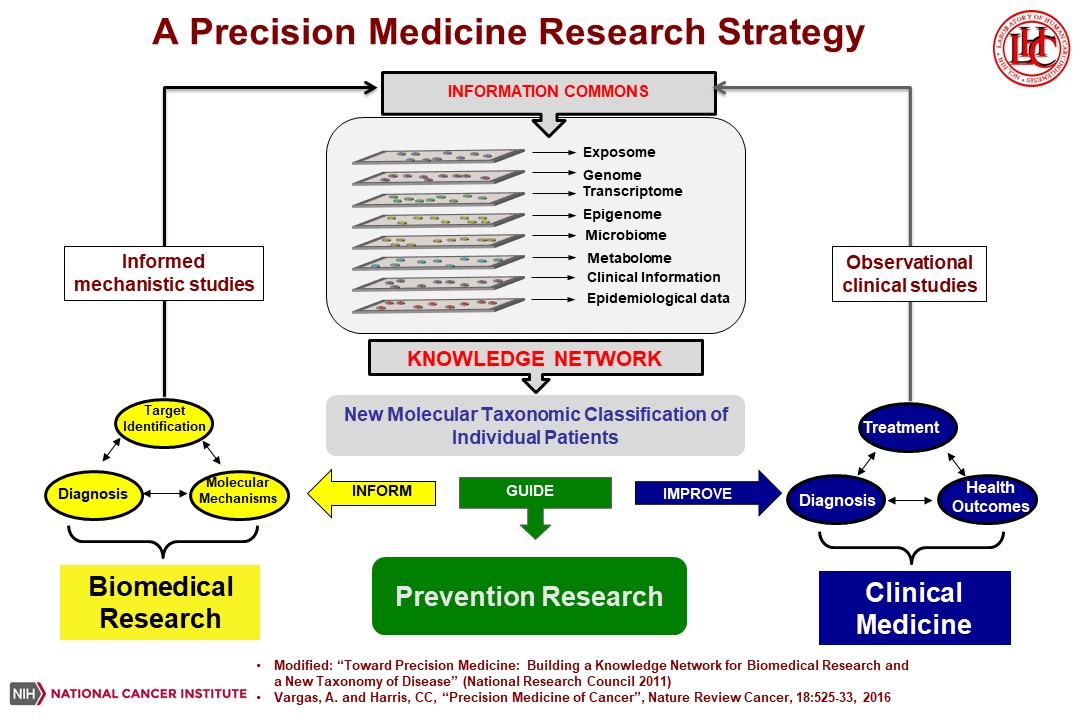 The p53 network is an intrinsic monitoring and responsive pathway of telomeric attrition and chronic stress involved in cellular aging and senescence. Cellular senescence, in cancer cells, can be a tumor suppressive mechanism that can be activated by p53. We are currently studying the molecular mechanisms of cellular senescence in normal human cells and the role of p53 isoforms in aging and carcinogenesis. Our research focuses on integrative p53 and miRNA networks in tumor suppression and the functional role of p53 isoforms, e.g., “dominant negative” ∆133p53, that also has gain of function as a transactivator of specific DNA repair genes such as RAD51 and “co-transactivator” of wild-type p53, p53β, both as natural regulators of cellular senescence, DNA repair and stem cell biology and are dysregulated in cancer, including damaging side effects of radiation and chemotherapy, and aging diseases, such as Hutchinson-Gilford Progeria Syndrome and Alzheimer’s disease. As a result of molecular evolution, ∆133p53 is specifically present in humans and primates, but not in other organisms, including mice, because of lack of an initiating methionine codon corresponding to the human codon 133 at exon 5 of TP53. 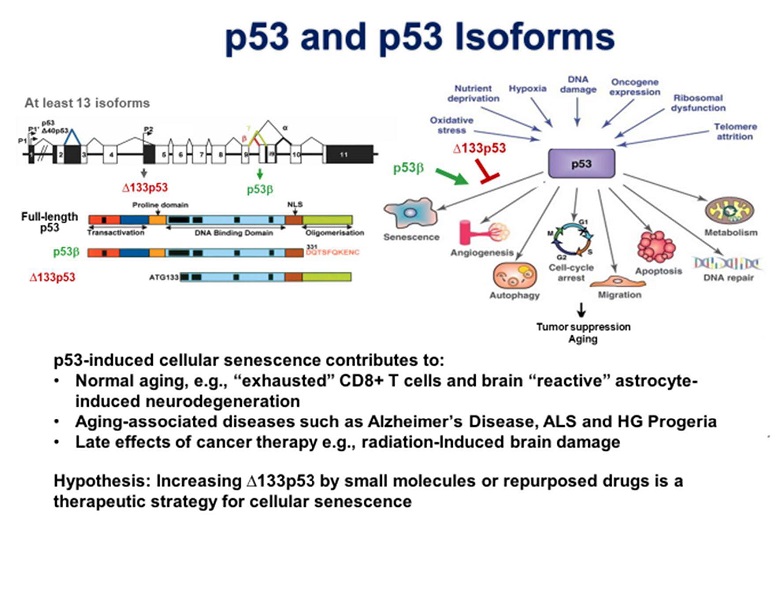 Harris received his M.D. from Kansas University School of Medicine. He completed his clinical training in internal medicine at the University of California-Los Angeles, Washington Veterans Administrative Hospital and the NCI. He has held positions of increasing responsibility at the NCI, and is also a Adjunct Clinical Professor of Medicine and Oncology at Georgetown University School of Medicine. Harris has received numerous honors throughout his distinguished career including the Alton Ochsner Award relating Smoking and Health (American College of Physicians), Deichmann Award (International Union of Toxicology), Charles Heidelberger Award (International Society of Gastroenterological Carcinogenesis) and the Distinguished Service Medal (the highest honor of the U.S. Public Health Service), NCI Outstanding Mentor Award in 2007 and 2013, Ph.D. (Honorary) Nippon University School of Medicine, the AACR-Princess Takamatsu Award and the AACR-American Cancer Society: Cancer Epidemiology and Prevention Award. Harris has published more than 700 journal articles, 142 book chapters, and 13 books, and holds more than 30 patents owned by the U.S. Government. He also serves as Editor-in-Chief for the journal, Carcinogenesis, and has held or currently holds elected offices in scholarly societies and non-profit foundations including the American Association of Cancer Research, the International Society of Differentiations, the Keystone Symposia on Molecular and Cellular Biology and Aspen Cancer Conference. Harris has a wide range of scientific interests and accomplishments spanning molecular genetics of human cancer to molecular epidemiology of human cancer risk. (Select links tab for Science Watch, CCR Connections Articles, two youtube videos: https://www.youtube.com/watch?v=8LnIv_yeq2g and https://www.youtube.com/watch?v=MYUiS_Mh7eg)