It has become increasingly evident that interactions between the enteric nervous system (ENS) and the immune system play important roles to modulate inflammatory responses. Such interaction is particularly critical in the context of the intestinal microenvironment given the unique properties of this organ: intestinal tissue is continuously exposed to numerous microbial and food-derived antigens. In order to deal with these stimuli yet maintain normal physiology and function, intestinal responses are tightly regulated by actions of both the immune and nervous systems, which co-localize in the intestinal microenvironment with close proximity. My research interest is to study the role of intestinal neuroimmune interactions in health and disease. Understanding the cellular and molecular mechanisms of the dynamic interplay between the ENS and the immune system is critical for retrieving a comprehensive view of intestinal homeostasis and for discovering new therapeutics of intestinal inflammatory diseases, such as inflammatory bowel diseases (IBD).

1. Cytokine regulation of intestinal peristalsis
The neuroimmune interactions involve the actions of neurotransmitters, neuromodulators, and cytokines that carry signals, often bidirectionally, between enteric neurons and immune cells. Such dynamic interactions within the intestinal environment have profound consequences for gastrointestinal (GI) secretion and motility. Power propulsive motility is a recognizable component of an intestinal defense program and immunoneural communication activates the program. We will study how cytokines integrate in neural regulation on GI motility during intestinal homeostasis and inflammation.

2. Reciprocal regulation of colonic Treg cell (cTreg) and enteric neuron.
During central nervous system (CNS) inflammation, neurons are highly immune-regulatory governing T cell response. These modulations can be achieved via neuropeptides, which are received by neuropeptide receptors expressed on T cells. However, it is not clear whether similar interactions occur within GI compartment. Intestinal inflammation causes multiple changes in the intrinsic tissue motor circuits, including neuronal hyperexcitability and increased synaptic facilitation. It is known that enteric innervation contributes to the pathogenesis of intestinal bowel disease (IBD). On the other hand, cTreg cells are also reported to be critical modulators during intestinal inflammation. To establish the cooperative interactions between cTreg cells and the enteric neurons, both of which rapidly produce tissue-protective responses, will provide new therapeutic strategies for the treatment of IBD and irritable bowel syndrome (IBS).

3. Human ENS lineages for cell therapy and drug discovery in humanized colitis model.
In order to further develop therapeutic approaches to modify human neural and immune dysfunctions during intestinal inflammation, we will establish a humanized animal model which hosts either human T cells or the ENS or both.

Dr. Wu completed his M.D. studies in China at Shanghai Jiaotong University School of Medicine, and then studied immunology and matrix biology as a graduate student at Muenster University, Germany. His main focus was T cell migration during the central nervous system (CNS) inflammation. He joined Dr. Vijay Kuchroo’s lab in Brigham and Women’s Hospital, Harvard Medical School as a postdoctoral fellow where he studied the molecular regulation of T cell differentiation during inflammation and autoimmunity. In 2017, Dr. Wu started a position as an NIH Stadtman Tenure-Track Investigator at the Experimental Immunology Branch where he studies the cellular and molecular mechanisms of neuro-immune interactions.

A team of scientists has been carefully studying changes over time in one type of immune cell -- known as a T helper 17 or Th17 cell. Their analysis led them to an unlikely suspect in the study of autoimmune diseases: salt.

View the video at:  https://www.youtube.com/watch?v=t6lsucTFnB4 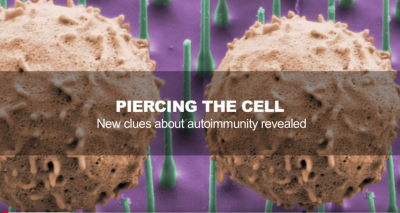