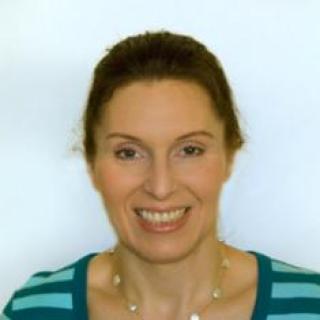 Dr. Heselmeyer-Haddad discovered that the majority of cervical carcinomas carry extra copies of the long arm of chromosome 3. She developed a diagnostic FISH test for the telomerase RNA component (TERC) on 3q which can differentiate low-grade from high-grade cervical disease with high sensitivity and specificity. The 3q test is now offered by several diagnostic labs. She recently developed a multiplex FISH assay that allows the simultaneous analysis of copy number changes of up to 10 tumor-specific genes on a single cell basis.

Cervical Cancer 3q as a diagnostic marker in cervical dysplasias. Screening of cervical carcinomas by comparative genomic hybridization (CGH) has revealed a non-random pattern of chromosomal aberrations (Heselmeyer, et al. 1996 and 1997; Kirchhoff, et al. 1999 and 2001). It was shown that the majority of cervical carcinomas carry extra copies of the long arm of chromosome 3 and with it genomic amplification of the RNA component of the human telomerase gene (TERC), which resides on cytoband 3q26. The analysis of routine PAP smears with a fluorescence in situ hybridization (FISH) probe for the TERC gene revealed that genomic amplification of this gene is likely to play a central role in progression from low-grade dysplasia to high-grade cervical intraepithelial neoplasia (CIN) and invasive cancer (Heselmeyer-Haddad, 2003). Specifically, progression was never observed in the absence of genomic amplification of TERC, and, inversely, extra copies of this gene were not present in lesions that spontaneously regressed (Heselmeyer-Haddad et al. 2005). Our most recent study showed that TERC is a powerful marker to discern PAP smears with underlying histologically confirmed low-grade from those with underlying high-grade cervical disease (Andersson et al. 2009). In the future, one could envision a screening strategy in which human papilloma virus (HPV)-positive Pap smears are triaged with the help of the TERC marker that would contribute to a more evidence-based individualized clinical management. This strategy is supported through biological causality, because both HPV and gain of 3q act in concert in disease initiation and progression. Therefore, the goal of our current study is to determine the usefulness of the TERC marker in HPV-positive cases from women with low grade squamous intraepithelial lesions (LSILs) and atypical cells of undetermined significance (ASCUS) in a large cohort of a population-based primary screening in collaboration with Dr. Sonia Andersson at the Karolinska Hospital in Stockholm, Sweden.

Multiplex FISH approach to investigate clonal evolution in cervical precancerous and cancerous lesions. In addition to the 3q marker, we are also planning to evaluate other important aberrations during cervical carcinogenesis, like gains on chromosomes 1q, 5p, 8q and 20q, and recurrent losses on 2q, 3p and 11q. We would like to take advantage of these frequent, non-random aberrations and try to understand clonal development in CIN lesions and cervical carcinomas and possibly determine additional pertinent markers for diagnosis and prognosis in cervical lesions. Therefore, we have developed FISH probe contigs for the following candidate genes in the respective regions: COX2 (1q), ING5 (2q), FHIT (3p), TERT (5p), MYC (8q), CHEK1 (11q), ZNF217 (20q). Together with the TERC probe for 3q and a ploidy probe for CEP7, these nine probes are subsequently hybridized in three 3-color probe panels onto the same cell preparation. This analysis will gather complete information for all nine probes within the same nuclei, which will allow us to build and model clonal evolution trees with the help of Dr. Alejandro Schaffer (NCBI) and Dr. Russell Schwartz (Carnegie Mellon University, Pittsburgh, PA) and their groups. We are planning to evaluate 10 CIN3 lesions, 10 cancers and 10 lesions with synchronous CIN3 and invasive cancer. Archival, formalin-fixed, paraffin-embedded samples containing the lesions of interest are cut into thick sections together with subsequent HE sections. The area of interest (e.g., CIN3) is marked by a pathologist and macrodissected from the thick sections and disintegrated. The resulting single cell suspension is cytospun onto a slide. This sample preparation avoids the disadvantages of FISH on sections (truncated, overlapping nuclei) while it ensures analysis of histologically defined cells. The set-up of well-defined samples and probe panels and the possibility of gathering information for eight genes within the same nuclei will give us the opportunity to shed light on clonal evolution during cervical carcinogenesis. Research Objectives: - Determine the usefulness of the TERC assay to determine the progression potential of HPV-positive cases from women with LSIL and ASCUS cytology in population-based primary screening - Determine gain and loss patterns of the analyzed probes within CIN lesions and cervical carcinomas - Compare similarities in the genetic make-up of the CIN and cancer lesions - Improve our understanding of clonal development during cervical carcinogenesis, which may lead to the development of additional biomarkers for diagnosis and prognosis - Characterize clonal patterns in CIN lesions and invasive cervical carcinomas with the goal of shedding light on clonal evolution during cervical carcinogenesis and model this

Breast Cancer Multiplex FISH assay to evaluate clonality and tumor heterogeneity of synchronous DCIS and IDC. Ductal carcinoma in situ (DCIS) refers to lesions with malignant epithelial cells that have not invaded the surrounding stroma. These lesions are confined to the ducts of the breast. It is thought that DCIS represents a stage that precedes invasive ductal carcinoma (IDC). However the linkage between these two lesions is still obscure. In order to analyze the patterns of genetic alterations as an approach to understand the correlation between DCIS and IDC, we developed four panels of FISH probes. The panels contained five oncogenes (COX2, MYC, CCND1, HER2, ZNF217) and three tumor suppressor genes (DBC2, CDH1, p53) specific for breast tumorigenesis and two centromeric probes (CEP10, CEP4) as a control for the ploidy of the cells. Research Objectives: - Determine gain and loss patterns of the gene probes within DCIS and IDC - Compare similarities in the genetic make-up of the DCIS and the corresponding IDC lesion - Characterize clonal evolution from the DCIS lesion to IDC The database from the 'Susceptibility to Breast Cancer Study' (conducted by the NCI and the National Naval Medical Center) was searched for patients positive for breast carcinoma with neighboring DCIS. Archived paraffin blocks were analyzed by a pathologist. Representative areas for invasive cancer and DCIS were micro-dissected and disintegrated. One cytospin for each lesion was hybridized with four FISH probe panels subsequently. A relocation software allowed for counting the same 150-200 nuclei for all four sets of probes. In collaboration with NCBI, algorithms were developed to compare clonal patterns. The data show that there are cases which exhibit the exact same major clone in both the DCIS lesion and the corresponding IDC lesion. However, many of the cases displayed differences in the major clones for DCIS and IDC, acquisition of a gain of MYC in the IDC clone being the most frequent change. These findings suggest that the clonal evolution from DCIS to IDC differs from case to case, indicating that in some cases major clones present in the DCIS are also successful in the IDC while in others the major clone(s) of the DCIS is/are replaced by clones with a different oncogene and tumor suppressor gene combination in the IDC. In detail, CDH1 was most commonly lost, and gain of MYC emerged during progression from DCIS to IDC. Four of 13 DCISs showed identical clonal imbalances in the IDCs. Six cases revealed a switch, and in four of those, the IDC had acquired a gain of MYC. In one case, the major clone in the IDC was one of several clones in the DCIS, and in another case, the major clone in the DCIS became one of the two major clones in the IDC. Despite considerable chromosomal instability, in most cases the evolution from DCIS to IDC is determined by recurrent patterns of genomic imbalances, consistent with a biological continuum. The goal of this study is to improve our understanding of the molecular events that are involved in the progression from pre-invasive to invasive cancer which can hopefully lead to the development of prognostic biomarkers that can predict this transition Clonal tree modeling was done in collaboration with Dr. Schaffer and Dr. Schwartz. This study is published in the American Journal of Pathology (Heselmeyer-Haddad et al. 2012).

Prostate Cancer Multiplex FISH reveals insights into clonal development in non-progressive and progressive prostate cancer and indicates loss of PTEN as a marker of poor prognosis. One of the major challenges in the clinical management of patients with prostate cancer is to gauge the risk of developing progressive disease. We therefore used genetic markers to understand the dynamics of genomic alterations during disease progression. Using our multiplex FISH approach, we enumerated copy numbers of sixgenes previously identified by array CGH to be involved in aggressive prostate cancer--TBL1XR1, CTTNBP2, MYC, PTEN, MEN1, and PDGFB--in six non-recurrent and seven recurrent radical prostatectomy cases. An ERG break-apart probe to detect TMPRSS2-ERG fusions was included. We neither observed differences in the degree of chromosomal and genomic instability (i.e., intratumor heterogeneity), nor in the percentage of cells with TMPRSS2-ERG fusion between samples with or without progression. However, tumors from patients that progressed had more chromosomal gains and losses, but showed a higher degree of selection for a predominant clonal pattern. The loss of PTEN was the most frequent aberration in progressors (57%), followed by the gain of TBL1XR1 (29%). The gain of MYC was observed in one progressor, which was the only lesion with an ERG gain, but no TMPRSS2-ERG fusion. According to our results, a probe set consisting of PTEN, MYC and TBL1XR1 would detect progressors with 86% sensitivity and 100% specificity. This will be evaluated further in larger studies. Clonal tree modeling was done in collaboration with Dr. Schaffer and Dr. Schwartz. This study is currently 'in press' at the American Journal of Pathology.

Detection of genomic amplification of the human telomerase gene TERC, a potential marker for triage of women with HPV-positive, abnormal Pap smears 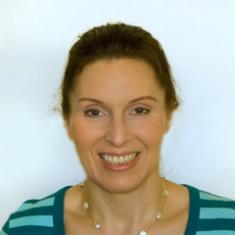 Dr. Heselmeyer-Haddad studied biology at the University of Oldenburg in Germany and obtained a Masters degree in biology in 1990. She received her Ph.D. degree from the Department of Tumor Biology at the Karolinska Institute in Stockholm, Sweden in 1996 (thesis mentor: Professor Gert Auer; thesis title: 'Genomic changes defining the progression of human colorectal and cervical tumors'). Dr. Heselmeyer-Haddad then joined the laboratory of Dr. Thomas Ried at the National Human Genome Research Institute (NHGRI) as a postdoctoral fellow. At NHGRI she continued her research, following up on her original discovery (made during her graduate studies) that the vast majority of cervical carcinomas harbor a gain of the long arm of chromosome 3. She developed a fluorescence in situ hybridization (FISH) probe for a candidate gene in the region of amplification, the gene for the human telomerase RNA component (TERC) and observed that cervical dysplasias containing a TERC gain persisted or progressed, while lesions without this change were likely to regress. Following the move of Dr. Ried's group to the NCI's Center for Cancer Research in 1999, Dr. Heselmeyer-Haddad was appointed as a staff scientist. During her time at NCI, Dr. Heselmeyer-Haddad has published several seminal studies on the TERC test as a significant diagnostic marker in cervical cytology using a variety of patient materials, showing good sensitivity and specificity of the test for the detection of progressive disease. Dr. Heselmeyer-Haddad has also worked on the discovery of early detection and progression markers in other cancers, including breast and prostate cancer. She recently developed a novel technique of multiplexing FISH probes for tumor-specific genes to gain new insights into tumor heterogeneity and clonal development by enumerating up to 10 probes within the same cell. Specifically, she used this technique to shed light on the transition from ductal carcinoma in situ (DCIS) to invasive ductal carcinomas (IDC) in synchronous lesions of the breast and to discern non-progressive from progressive cancers of the prostate. Dr. Heselmeyer-Haddad is currently working on a multiplex FISH study to understand the clonal relationship of synchronous CIN3 and invasive cervical carcinomas and is following up on her TERC studies, analyzing low-grade Pap smears with underlying high-grade histology to validate the usefulness of the test in this important patient group.