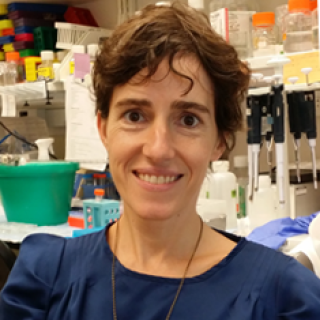 Dr. Callen Moreu has made major contributions in dissecting the mechanisms involved in DNA double-strand break repair with a focus towards understanding the role of DNA damage and repair proteins as contributors to chemoresistance/sensitivity in breast and ovarian cancers.

In the Laboratory of Genome Integrity, Dr. Callen has made numerous seminal contributions to the field of DNA damage and repair. Briefly, she described a new role of the ataxia telangiectasia protein (ATM) in generating chromosomal translocations and causing cancers. She found that in the absence of ATM, DNA damage in cells is not eliminated but rather persists. This work helped explain why there is a high rate of cancer associated with mutations in ataxia telangiectasia. Subsequently, she took this work a step further with her discovery that ATM does not act alone but rather works redundantly with another protein called DNA-PK, which together coordinately repair DNA breaks and prevent tumorigenesis.

Recently, the major thrust of Dr. Callen’s work has been trying to understand how altering the balance between DNA repair pathways can be exploited to overcome acquired resistance in breast cancer treatment. In this regard, she was able to demonstrate that the HR (homologous recombination) and NHEJ (non-homologous end joining) DNA repair pathways compete to process DNA breaks that arise during DNA replication and that shifting the balance towards HR can be a critical driver of chemo-resistance in BRCA1/2 mutated cancers. Overall, Dr. Callen's work has had great impact on the DNA repair and cancer biology fields.

Her work has shed some light on the etiology and accumulation of chromosomal translocations in cells and how they drive to cancer. Following these studies, Dr. Callen discovered redundant functions in DNA repair and in the activation of the major p53 tumor suppressor. More recently, Dr. Callen has focused her research on the link between genome instability and breast cancer caused by hereditary mutations in BRCA1, having her observations opened up therapeutic windows for second line chemotherapies in BRCA1 tumors that are resistant to novel anti-cancer treatments.

More recently, Dr. Callen has been involved together with other colleagues at LGI, in the development of a state-of-the-art Double Strand Break (DSB) genome-wide mapping method (END-seq) that has been successfully deployed within LGI to address a wide-ranging set of questions from genome-editing specificities of nucleases to the role of DSBs in genome organization to the mapping and characterization of replication origins. The impact of this novel, and much needed, technique has been demonstrated by its immediate and successful adoption by many CCR, NCI labs and indeed laboratories around the world that are interested in understanding the cause and consequence and the underlying mechanisms of DNA damage and repair. 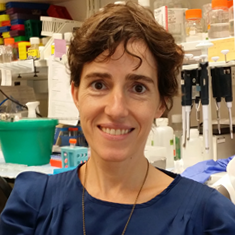 Dr. Callen completed her B.S and M.S. degrees in Biology at the Universitat Autonoma in Barcelona, Spain and obtained her Ph.D. in Genetics from the Department of Genetics and Microbiology at the same university. Her dissertation focused on the study of the biology of the Fanconi Anemia DNA repair syndrome. In 2005, she joined Dr. Andre Nussenzweig’s group as a postdoctoral fellow where she has made major contributions in trying to dissect the mechanisms involved in DNA double-strand break repair with a focus towards understanding the role of DNA damage and repair proteins as contributors to chemoresistance/sensitivity in breast and ovarian cancers. In 2009, Dr. Callen was converted to a research fellow and she has been a staff scientist in the Laboratory of Genome Integrity since 2011. In 2015, Dr. Callen was promoted to the position of Associate Scientist within the Laboratory of Genome Integrity.