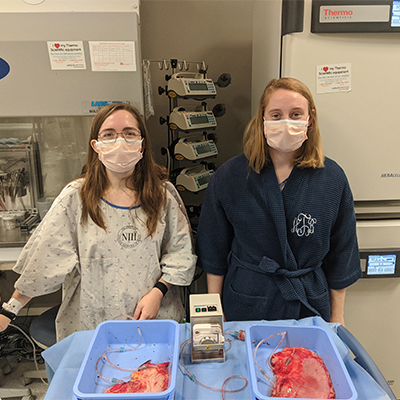 Audra Addison and Amy Toner stand next to their stomachs after removal. The stomachs were then kept alive for several days to allow the researchers to study the development of cancer and the effects of different therapies in unprecedented detail.
Photo credit: Jeremy Davis

While treatment options for many forms of cancer have advanced rapidly over recent decades, therapies for some rare and aggressive forms of cancer remain limited. Stomach cancer, also known as gastric adenocarcinoma, falls into this category. For patients with a genetic predisposition to stomach cancer, the current treatment is complete removal of the stomach.

Surgery to remove the stomach has been done for about 100 years and is a fairly safe procedure. Afterwards, patients are still able to eat but must consume smaller and more frequent meals. The food passes directly to their intestines where most nutrients are absorbed, but researchers are continuing their search for a less aggressive form of treatment. Finding better therapies for gastric adenocarcinoma is difficult, in part, because of the rarity of the disease as well as the length of time it takes for research to progress from the laboratory to the clinic.

Jeremy Davis, M.D., Associate Research Physician in the Center for Cancer Research’s Surgical Oncology Program and Surgeon-in-Chief at the NIH Clinical Center, is a specialist in stomach cancer. He is hoping to accelerate the scientific process through a truly novel research project—after removing the stomach of a patient, his team is connecting the organ to a machine that keeps the stomach “alive” for several days. This allows them to study the development of cancer and the effects of different therapies in unprecedented detail.

“We can biopsy the stomach, we can image it, we can add drugs to it—all the while having zero impact on the patient because it’s not in their body anymore,” explains Davis. This approach, he emphasizes, allows research to be more realistic than what is done in the laboratory.

Recently, two women heard of Dr. Davis’ work and traveled to the NIH Clinical Center to participate in his research. A certain mutation in their CDH1 gene means they are highly susceptible to gastric adenocarcinoma.

Amy Toner is a 26-year-old woman from South Carolina whose father has the same gene mutation and had his stomach removed six years earlier as a preventative measure. Audra Addison is a 20-year-old woman from Clever, Missouri, whose mother was adopted and only recently discovered her biological family’s genetic predisposition to stomach cancer. Both Toner and Addison have a strong passion for research and volunteered to participate in this study at NIH.

Given her father’s experience, Toner has known for much of her life that she and her sister were at high risk for developing stomach cancer. “My sister and I knew that we had a 50/50 shot, and so she started doing some research on specialists. She came about the NIH in that way,” explains Toner. “I’m a healthcare professional, so I know the importance of health research, and I knew that Dr. Davis’ research was the biggest in the country. So for me, it was a no brainer.”

As for Addison, she is studying bioinformatics and was considering specializing in cancer before her own genetic tests revealed her susceptibility to gastric adenocarcinoma. “I have a passion for research,” she says. “I would do anything to help so that in the future, people won’t have to go through drastic surgery.”

After the two women underwent their respective surgeries, their stomachs were taken to a laboratory in the next room. There, the arteries and veins of their stomachs were hooked up to a machine that diffuses a special solution containing oxygen to help the organ stay alive.

In the following 72 hours, Davis’ research team conducted a series of detailed imaging tests and experiments on the stomachs. Part of this work involved exploring possible methods for testing drugs in the isolated organs, which could be used in future trials.

One of these methods that Davis hopes to study in isolated stomachs relies on a concept called synthetic lethality. With this approach, certain drugs generate a specific effect on mutant cancer cells that makes them more likely to die. Davis emphasizes that while this type of cancer therapy is not new, the ability to study the effects of the drugs in real stomachs is truly novel and could pave the way for more effective therapies in the future.

“The idea is that these precancerous CDH1 mutant cells in Audra and Amy’s stomachs are potentially susceptible to specific drugs that would allow us to stop those cells in their tracks or kill them. And so this research may mean that we won’t need to remove people’s stomachs in the future,” says Davis. “That is our ultimate goal.”