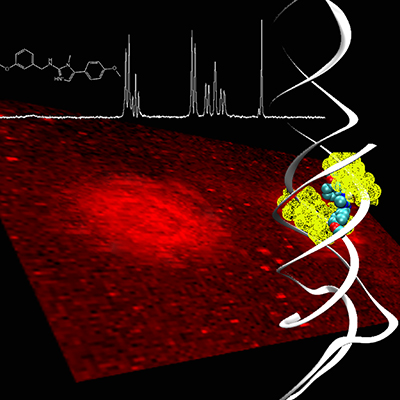 Le Grice and his colleagues used a drug screening technique (symbolized here in red) to analyze thousands of compounds, in order to find those that will bind to a type of long noncoding RNA associated with cancer. The structural cartoon on the right represents one of these compounds binding to the RNA.
Image courtesy of Dr. Michael Yonkunas, University of the Sciences, PA

Long non-coding RNAs (lncRNA) are transcripts that, for the most part, are not translated into proteins, and yet some of these RNAs have been found to play a role in the development of cancer. “MALAT1 is an up-regulated [RNA] transcript in non-small cell lung tumors with a high propensity for metastasis and subsequently associated with poor survival in patients with various tumor types,” explains Stuart Le Grice, Ph.D., Senior Investigator in CCR’s Basic Research Laboratory.

In the hopes of finding small molecules that could target and disable MALAT1, Le Grice and his colleagues began by screening 26,000 different compounds, identifying 28 that were likely to bind strongly to the lncRNA, and in particular, a section of the molecule called the expression and nuclear retention element (ENE), which assumes a triple-helical configuration.

The researchers studied the effects of these compounds in lab-grown mouse organs that were cancerous. Two of these, labelled compound 5 and 16, were demonstrated to reduce Malat1 expression levels in the organoids by 54 percent and 41 percent, respectively; moreover, the compounds altered the morphological features associated with the malignancy. “Our results suggest small molecules targeting the ENE triple helix may have benefit in treating MALAT1-associated malignancies,”says Le Grice.

He notes that, critically, more research is needed to make sure that compound 5 and 16 from this study do not bind to similar elements of other lncRNAs if these are to be used in a clinical setting.

“Our next step is to apply X-ray crystallography to obtain a high-resolution structure of MALAT1 in complex with compounds 5 and 16, as a prerequisite to designing derivatives of these compounds with greater potency,” says Le Grice.