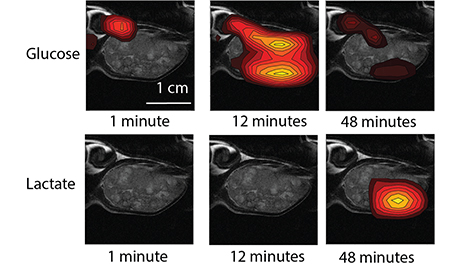 This image shows contour maps created from glucose and lactate signals. A new image is generated every minute, allowing changes in metabolism to be tracked in real time.
Image courtesy of Jeffrey Brender

Building on previous research that showed it was possible to remove much of the noise from MRI scans, CCR investigators have developed a new MRI technique that is able to measure cancer metabolism directly from specialized MRI scans. To test the potential of this new technique, the researchers examined two types of human pancreatic adenocarcinoma cells implanted into mice. The two tumor types showed substantial differences in their underlying anatomy, which could be related to differences in the aggressiveness of each type. However, only subtle differences in metabolism could be seen in chemical analyses of the biopsies.

Using 13C-labeled glucose as a tracer to track metabolic pathways, the researchers were able to show previously hidden molecular details that revealed differences in the tumors that would not have been evident with current imaging techniques. Shun Kishimoto, M.D., and Jeffrey R. Brender, Ph.D., from the lab of Murali C. Krishna, Ph.D., Senior Investigator in CCR’s Radiation Biology Branch, along with W. Marston Linehan, M.D., Chief of the Urologic Oncology Branch, and team member Daniel R. Crooks, Ph.D., reported the findings in eLife on August 13, 2019.

This new technique is important because aberrant glucose metabolism plays a central role in cancer and other pathologies. The rapid uncontrolled growth of cancer cells requires a different metabolism than the steady, controlled growth of normal cells. Now, for the first time, it is possible to use MRIs to not only see anatomical information related to physical differences among body tissues, but also to detect subtle differences in metabolism in real time.

“In some instances, we are able to get a 70-fold improvement in the signal, enabling us to see differences in biochemically active regions,” explains Brender. “As a result, we could distinguish differences in the two tumors by analyzing their metabolism.”

This technique has a potential to improve the quality of imaging significantly. “The current imaging techniques being used have limitations in what they show,” explains Crooks. “This technique, however, takes into account metabolic differences, which cannot be seen in CT scans or even PET scans. This can make a tremendous difference, especially since metabolically active cancers tend to be more aggressive.”

The team is planning on using the denoising technique with different types of MRI images, including diffusion weighted MRI, which forms a critical part of clinical cancer imaging. Working In collaboration with a team at the University of California San Francisco, CCR researchers have been able to see new metabolic features in 13C MRI scans in prostate cancer and glioblastoma patients. In some cases of pediatric glioblastoma, the difference in image quality has been as large as a 500-fold improvement.

In fact, Krishna stresses that it is the denoising technique that represents a fundamental change in MRI. “It enables us to ask questions about the metabolism of tumors and other facets of their behavior that we weren’t able to ask before,” he says. “The technique opens a new imaging window into cancer.”