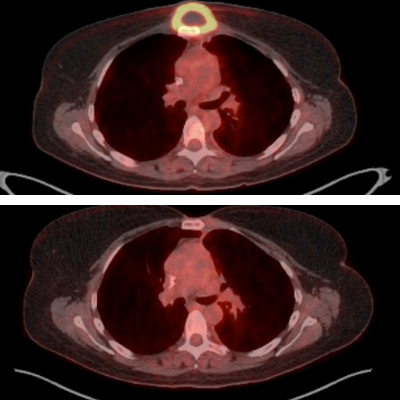 A lymphoma mass in 2011 before treatment (top, yellow ring with dark center) and about two years after treatment (bottom) from a trial participant who is still in complete remission today.
Image credit: NIH Department of Nuclear Medicine

A phase 1 clinical trial of chimeric antigen receptor (CAR) T-cell therapy, which involves re-engineering patients’ own immune cells to attack cancer cells, has demonstrated previously unheard of remissions of up to five years in relapsed B-cell lymphoma patients with few side effects. A study published in the Journal of Clinical Oncology on October, 6, 2020, by Center for Cancer Research investigators reports the results of the trial that shows benefits of the CAR T-cell therapy can much longer than has previously been reported.

In CAR T-cell therapy, disease-fighting white blood cells, known as T cells, are gathered from patients and genetically modified in the laboratory to express receptors, known as CARs, that target surface proteins on cancer cells. The resulting CAR T-cells are then coaxed to proliferate before being infused back into patients, where they proliferate even further, ready to descend upon and destroy cancer cells that express the protein target.

B-cell lymphoma is a type of cancer that arises in a class of white blood cells known as B cells. Researchers led by James Kochenderfer, M.D., Senior Investigator in the Surgery Branch (SB), and Steven Rosenberg, M.D. Ph.D., Surgery Branch Chief, developed a CAR that targets CD19, a protein expressed only on B cells.

In the phase 1 clinical trial, Kochenderfer and colleagues used anti-CD19 CAR T-cells to treat 43 patients with various relapsed B-cell lymphomas, including diffuse large B-cell lymphoma or primary mediastinal B-cell lymphoma, low-grade B-cell lymphoma, and chronic lymphocytic leukemia. Three patients received two CAR T-cell treatments, for a total of 46 treatments. Over the course of the trial, which lasted from 2009 to 2015, the researchers refined the T cell preparation and treatment regimen. Since then, the anti-CD19 CAR T-cell therapy has been tested it in late-phase, multi-center trials. In 2017, the FDA approved the therapy, sold as Yescarta (axicabtagene ciloleucel), for patients with some types of large B-cell lymphoma who have relapsed or did not respond after at least two other forms of treatment.

The new report provides the longest follow-up to date of patients in remission following anti-CD19 CAR T-cell therapy. The first author of the new report was Kathryn Cappell, M.D. Ph.D., Medical Oncology Fellow in SB. Kochenderfer’s team saw remissions lasting three or more years in 51% of the 45 evaluable treatments. After these treatments, patients survived without needing additional lymphoma therapy for a median of 55 months. Many who had life expectancies of only six months or less with older therapies remain in complete remission, and one patient has been in complete remission for more than nine years.

Long-term side effects were rare. Since anti-CD19 CAR T-cell therapy depletes all B cells, healthy and cancerous alike, four patients were hospitalized for pneumonia and other infections, but have since recovered.

The findings raise the possibility that anti-CD19 CAR T-cell therapy could cure patients with certain relapsed B-cell lymphomas. “That’s why this paper is exciting,” Kochenderfer says. “These people can live for many years without problems, without treatment.”