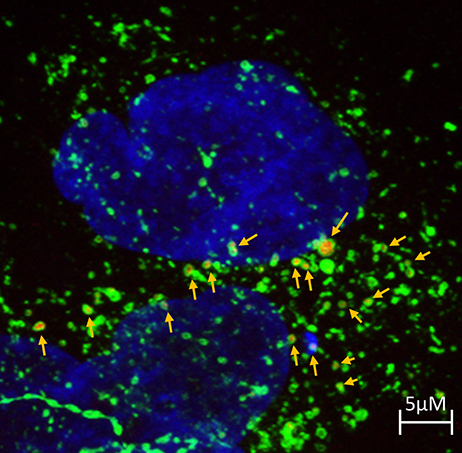 A type of therapy called antibody-drug conjugates (ADCs) combines the precision of cancer-targeting proteins and the potency of cytotoxic drugs. Here you can see a new type of ADC (red) entering liver cancer cells.
Photo courtesy of Mitchell Ho

Researchers in NCI’s Center for Cancer Research have identified two potent drug-antibody combinations that target and kill liver cancer cells. The two biopharmaceutical drugs developed by Mitchell Ho, Ph.D., Senior Investigator in CCR’s Laboratory of Molecular Biology, and colleagues were found to reduce the size of liver tumors and increase survival in mice, hinting at a new way to treat the disease. The results were published on October 24, 2018, in Hepatology.

Hepatocellular carcinoma (HCC) is the most common form of liver cancer. Existing FDA-approved therapies for the disease have had a limited effect on patients’ survival, and HCC remains one of the deadliest cancers worldwide.

The investigators’ approach to tackling the problem of HCC treatment involved a technique that takes advantage of a protein that is commonly found on the surface of HCC cells. The protein, GPC3, is expressed in more than 70 percent of HCC cases and is associated with a poor prognosis. Researchers have been exploring how to use antibodies that recognize and target GPC3-expressing cancer cells while sparing healthy cells in treating the disease.

“Our early research indicated that antibodies to GPC3 alone can inhibit liver tumor growth but were not able to cause tumor regression or remission,” explained Ho.

To boost the ability of GPC3 antibodies to combat cancer, Ho and his postdoctoral fellow Ying Fu, along with Martin Schnermann, Ph.D., in CCR’s Chemical Biology Laboratory, sought to identify cytotoxic drugs that they could link to the antibodies. These types of drugs are called antibody-drug conjugates (ADCs) and are gaining popularity in the research community thanks to their potency and effectiveness.

To identify drugs that they could combine with GPC3 antibodies, Ho’s team collaborated with Matthew Hall, Ph.D., and his group at the National Center for Advancing Translational Sciences to screen 9,000 compounds, identifying two that were likely to be particularly toxic to HCC cells. The researchers chemically linked these two compounds to GPC3 antibodies to create two new ADCs, called hYP7-DC and hYP7-PC.

Ho notes that multiple phase III clinical trials involving other compounds that target HCC have recently failed, emphasizing the unmet need for new therapies against HCC. “Our data indicate that hYP7-PC is a very potent in liver cancer, which is notorious for chemotherapeutic drug resistance. This study experimentally establishes GPC3 as a new target of ADCs in liver cancer,” he said.

Next, his lab intends to investigate the mechanistic role of GPC3 in liver cancer biology and systematically analyze the effect of GPC3 targeted therapy at the single-cell level. Ho says, “We hope to apply that knowledge to optimize the ADC with better anti-tumor efficacy and less potential side effects.”