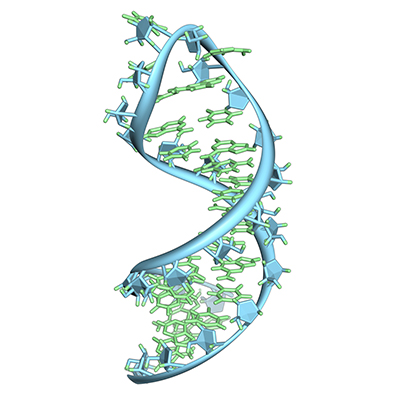 Researchers have created synthetic compounds capable of controlling a riboswitch, a genetic component that plays a critical role in regulating gene expression in some bacterial species. The finding appeared August 13, 2020, in Cell Chemical Biology and could pave the way towards a novel class of antibiotics.

“One reason that riboswitches are an appealing target is because they don’t exist in humans,” explains John Schneekloth, Ph.D., an Investigator at CCR’s Chemical Biology Laboratory who was involved in the study. “In pathogenic bacteria, these riboswitches represent potential antibiotic targets that do not influence genetic expression in humans.”

Developing compounds that target riboswitches has remained a challenge, however. In his latest work, Schneekloth’s team partnered Adrian Ferré-D’Amaré’s lab at the National Heart, Lung, and Blood Institute, with the study being led by Christopher P. Jones, Ph.D., a fellow in the Ferré-D’Amaré lab.

The two labs, using the bacterial species Fusobacterium ulcerans, explored thousands of different compounds that weren’t related to the ZTP riboswitch but could potentially bind to it. This riboswitch plays an important role in controlling the bacterium’s metabolism, making it a desirable target for therapeutics. In a second approach, the researchers altered the structure of ZTP riboswitch in order to explore potential molecules that could bind to it efficiently.

Their efforts yielded a handful of compounds capable of binding to a ZTP riboswitch and activating it. One of the synthetic compounds was about three times more effective at binding to the ZTP riboswitch than the molecules that naturally bind to it.

“Although this research is in the early stages, our work could eventually yield small molecules with antibacterial properties,” explains Jones. “In the process of attempting to reach that goal, however, we may learn useful methods and approaches to more broadly target completely unrelated RNAs involved in human disease.”

The researchers are continuing this work by looking for even more potent compounds for targeting ZTP riboswitches and also for compounds that target other riboswitches, which could have important therapeutic applications.

“Finding molecules that bind to and control RNA is a frontier of medical chemistry,” Schneekloth says. “Our work is important for learning how we can design molecules that control the function of RNA.”