New clinical trial will determine if gliomas respond to immunotherapy 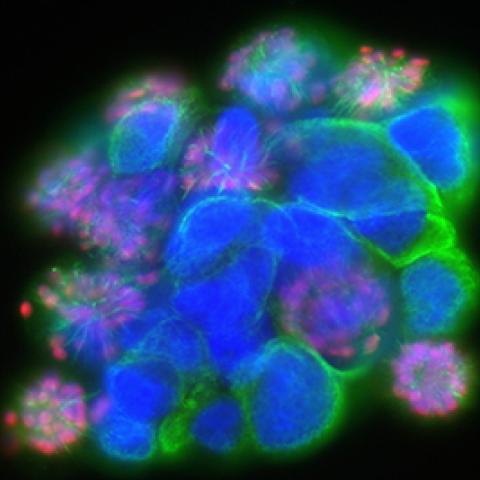 A class of immunotherapy drugs called immune checkpoint inhibitors is increasingly being used to treat a wide range of cancers, but they seem to be more effective in some patients more than others. Will one of these inhibitors work better for patients with high levels of mutations in their brain gliomas than for those with low levels? Researchers suspect that patients whose tumors exhibit hypermutation features could benefit the most from immune checkpoint inhibitors. Jing Wu, M.D., Ph.D., Investigator in CCR’s Neuro-Oncology Branch, is leading a clinical trial to test the drug nivolumab in people with gliomas.

Brain tumors are often highly aggressive, and nearly 17,000 people in the United States with brain tumors die from the disease each year. Gliomas make up about 80 percent of all malignant brain tumors. Mutations in genes that direct the production of the enzymes isocitrate dehydrogenase 1 and 2 (IDH1 and IDH2) were discovered in a subset of gliomas. These tumors with mutated IDH1/2 tend to progress slowly and exhibit a rather distinct pattern of evolution over time. More often occurring in patients in their 30s and 40s, IDH-mutant tumors begin as less aggressive or lower grade, and gradually become more malignant over time, evolving into high-grade tumors. Some of these tumors end up accumulating a very high number of mutations and are referred to as hypermutators.

Once a tumor progresses to a higher grade, it becomes much more aggressive. Dr. Wu is hopeful that the immune checkpoint inhibitor nivolumab may be beneficial for patients with more aggressive tumors, especially those with hypermutator tumors. As these tumors accumulate mutations, they tend to exhibit an increased number of cancer-specific proteins, called neoantigens, on their surface.

Nivolumab is already used to treat a number of other cancers, including advanced melanoma and non-small cell lung cancer, renal cell carcinoma and Hodgkin lymphoma. A 2017 trial explored the use of nivolumab to treat the most aggressive type of glioma, glioblastoma, but it was not found to be more beneficial than treatment with bevacizumab, a therapy that affects blood flow to a tumor. This new trial, however, will look at a subset of patients who are more likely to benefit from nivolumab. Immune checkpoint inhibitors have proven to be particularly helpful for subsets of patients with other types of cancer, and the pattern could hold true for glioma patients with the hypermutator phenotype.

Another reason that immune checkpoint inhibitors are an appealing approach for treating brain cancer is that very few drugs are able to cross the blood-brain barrier, a protective layer of cells surrounding the brain that filters out toxins and harmful pathogens. Immune cells, however, have free passage across the blood-brain barrier, so boosting immune cells throughout the body could in turn create more immune cells in the brain capable of eliminating cancer cells.

Dr. Wu’s new trial will involve up to 29 patients with hypermutator tumors and up to 46 patients with lower mutation levels. By comparing the two groups of patients to see if there is any difference between six-month progression-free survival rates, the clinicians aim to find if one group benefits from treatment with nivolumab more than the other. This will also be a valuable opportunity to study how hypermutator gliomas evolve over time.

Throughout the trial, which may last several years, the research team will also be collecting tissue and blood samples from patients. Their secondary goal is to explore whether other factors, such as immune competence, have something to do with the treatment response of individuals.

“Through these mechanisms, we might be able to find an effective treatment combination with this immune checkpoint inhibitor,” Dr. Wu explained.