Liver cancer may unexpectedly be influenced by platelets 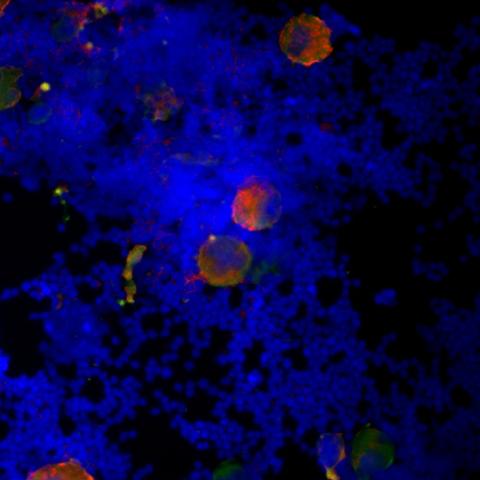 Scan of bone marrow from mice with non-alcoholic fatty liver disease (NAFLD); the CD40L protein (red) is present inside megakaryocyte cells (green), which are responsible for the production of platelets.
Image credit: Tim Greten, M.D.

Scientists at CCR have discovered an unexpected way in which platelets can help limit the growth of tumors in the livers of mice. The results, published September 1, 2022, in Cancer Cell, provide a better understanding of the relationship between platelets, the immune system and the development of cancer in the liver.

Platelets are cell fragments in our blood that help form clots and stop bleeding. Previously, studies have shown that regardless of cancer type, patients with high numbers of platelets in the blood tend to have more severe cases of disease. Tim Greten, M.D., Deputy Chief and Senior Investigator in CCR’s Thoracic and GI Malignancies Branch, has sought to understand the role of platelets in the development of hepatocellular carcinoma (HCC), a particularly aggressive form of liver cancer. “HCC is a very common cancer worldwide and it's among the top 10 killers in the United States in terms of cancer-related death,” explains Greten.

His team was studying the role of platelets in mice with HCC that was caused by fatty liver disease when they discovered something unusual — high platelet levels were associated with a reduced risk of tumor growth in this model, counter to what previous studies have reported in other cancers. Importantly, this phenomenon occurred when they inhibited a key receptor found on platelets, called P2Y12. The researchers also found that these mice had elevated levels of the CD40 ligand, a molecule that’s known to have anti-tumor properties.

To investigate this relationship between platelets, the P2Y12 receptor and the CD40 ligand further, Greten’s team conducted a series of experiments using drugs, genetic manipulations and platelet transfusions in mice. The results showed that platelets can directly influence levels of CD40 ligand and that the ligand’s anti-tumor properties reduced the tumor burden in mice. They showed that blocking the P2Y12 receptor on platelets can reduce the amount of CD40 ligand that is produced.

“We realized, in this case of HCC associated with fatty liver disease, platelets actually play a good role, because they provide the CD40 ligand, which helps with adaptive immune responses downstream,” explains Greten.

He notes that these results may differ from previous studies because earlier work has investigated the role of platelets in the initial development of cancer, whereas in this study, Greten’s team was investigating platelets once the tumors were well established.

Another interesting finding from this study is that CD40 ligands from platelets were beneficial not only for mice with liver cancer, but also for mice modeling other types of cancer that had spread to the liver. Greten plans to study the mechanisms behind CD40 ligands in greater detail, which could reveal ways of harnessing the molecule for therapeutic purposes.