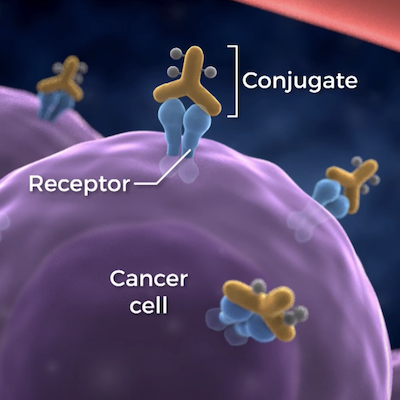 A device and drug combination based on photoimmunotherapy, a therapy developed in CCR that uses a light-activated antibody-dye conjugate to potentially destroy cancer cells and stimulate the immune system, has been granted approval by the Ministry of Health, Labour and Welfare (MHLW) in Japan for the treatment of unresectable locally advanced or locally recurrent head and neck cancer.

The treatment, whose internal development was led by Hisataka Kobayashi, M.D., Ph.D., a Senior Investigator in CCR’s Molecular Imaging Branch (MIB), uses a targeted cancer drug conjugated to a dye that is administered by infusion. The drug binds to cancer cells via receptors on their surfaces and remains inactive until it is exposed to non-thermal near infrared light. The illumination activates the dye component which leads to rapid necrosis of cancer cells with minimal effects on normal surrounding tissue. In addition, as seen pre-clinically, the rapid cell killing is thought to stimulate the immune response. The first photoimmunotherapy drug to be studied in patients with recurrent, local head and neck tumors was RM-1929/ASP-1929, a molecule developed in Dr. Kobayashi’s lab that links a light-absorbing dye to an antibody against the epidermal growth factor receptor (EGFR). EGFR is present in high levels on the surface of several different types of cancer cells including head and neck cancers.

The MHLW granted approval of the Bioblade® Laser System and Akalux® IV Infusion 250mg (cetuximab saratolacan sodium). This device and drug combination was developed under the Rakuten Medical Illuminox™ platform. Clinical trials tested photoimmunotherapy with RM-1929/ASP-1929 in patients with recurrent head and neck cancers who could not be treated with surgery, radiation, or chemotherapy.

Approval of photoimmunotherapy with RM-1929/ASP-1929 by the U.S. Food and Drug Administration will depend on the results of a larger phase 3 trial.

Photoimmunotherapy is also being explored as a treatment for other types of cancer. Early-phase clinical trials have begun testing RM-1929/ASP-1929 against other cancers where overexpression of EGFR is common, such as esophageal and gastric cancers. By swapping the antibody portion of the light-activated drug to recognize different proteins, the same approach can be used to target other kinds of cancer cells or to eliminate cells that interfere with the body’s own anticancer defenses, says Peter L. Choyke, M.D., Chief of the MIB, and a collaborator in photoimmunotherapy development.

In CCR, researchers plan to investigate whether the approach can bolster the immune system’s activity against the cancer by eliminating immune-suppressing regulatory T cells.