In patients with severe chronic lymphocytic leukemia, B cells get stuck in hyperactive mode 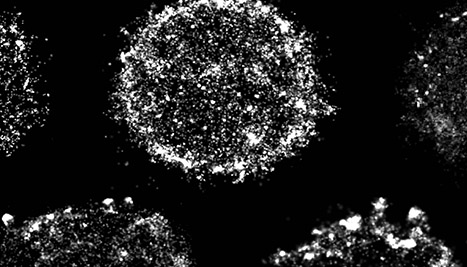 Analyzing how cancer cells respond to stress signals could help clinicians assess the severity of disease in patients with chronic lymphocytic leukemia (CLL), according to CCR researchers and colleagues.

Clinical outcomes vary significantly in patients diagnosed with CLL. Some patients remain healthy for decades whereas others decline quickly and require aggressive treatment. Currently, it remains difficult to predict how the disease will progress. Each patient’s cancer is unique, driven by the over-proliferation of an immune system B cell with its own particular genetic makeup, explains Grégoire Altan-Bonnet, Ph.D., an NIH Stadtman Investigator in the Cancer and Inflammation Program. “The diversity that we have among patients means that every patient comes with a different disease,” he says. “And we don’t have a good ruler to compare different patients.” The team’s study, published July 23, 2019, in Cell Reports, could help change that.

Collaborating with researchers at Memorial Sloan Kettering Cancer Center and the National Heart, Lung and Blood Institute, Altan-Bonnet’s team obtained blood samples from healthy donors and from patients with CLL. In the lab, they exposed the cells to phosphatase inhibitors, a form of stress that releases the brakes on the cellular pathways that activate a B cell and spur its growth. They measured each B cell’s response to that stress as determined by signaling inside the cell as well as the cells’ ability to return to a normal state after the stress signals were removed.

As they gradually increased B cells’ exposure to the stress, the team observed a surprising effect: rather than proportionally ramping up internal activation signals, each cell had an all-or-nothing response. The team’s data indicated that each B cell was activated only when the external stress reached a certain threshold. That threshold varied among cells and was lower in cells from patients with CLL than it was in B cells from healthy people. Once the switch was flipped,cancerous B cells became stuck in a hyperactive mode that sustained their proliferation, Altan-Bonnet explains.

Using mathematical modeling, the team predicted that CLL cells are vulnerable to this hyperactivation because the B cell receptors (BCRs) that activate the cell in response to infection are clustered together on their surfaces. In healthy cells, BCRs are usually dispersed and come together only when triggered to do so, a process that is essential to switch on downstream signaling inside the cell. The constant presence of BCR clusters on CLL cells, which the team was able to visualize with super-resolution microscopy, keep the cancer cells poised for activation and makes it harder for them to return to an inactive state.

The team found that among patients with CLL, those whose B cells most readily became stuck in a hyperactive mode had the most severe disease. Patients whose leukemic cells resisted this mode and behaved more like normal B cells were less likely to have experienced disease progression that required aggressive treatment.

The approach will need further testing before it can be implemented for diagnostic use in people, but Altan-Bonnet says the stress test his team used is simple to run and can be done using just a drop of a patient’s blood, suggesting it could be developed into a useful diagnostic tool.