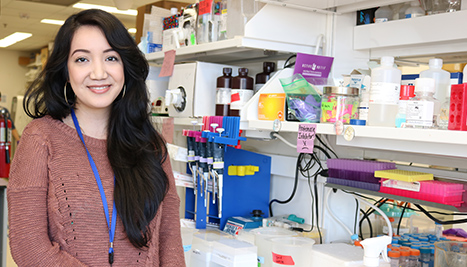 Anaisa Quintanilla-Arteaga, a first-generation American of Mexican descent from El Paso, Texas, is currently an iCURE scholar. iCURE, the intramural extension of the CURE (Continuing Umbrella of Research Experiences) program, supports mentored research experiences for qualified students and scientists. Quintanilla-Arteaga’s ultimate goal is to be the Latina scientist she wishes she had seen when she was younger, and “hopefully help younger generations of Latinas realize that they belong and can thrive in STEM, too.”

Growing up, it was common for Quintanilla-Arteaga to be given traditional folk medicine as a first line of treatment for any ailment she had. “It was always some kind of plant-based medicine that came with an anecdote about how [this] had worked previously for some distant relative of an older generation,” she says.

During her graduate studies in physiology at Georgetown University, she became skeptical of these medicines, creating a wedge between herself and her family. It wasn’t until she took a course on medicinal plants that she realized how close her two worlds really were.

Quintanilla-Arteaga’s coursework required her to read scientific articles on the healing properties of many plants, including mint leaves, and the animal and human studies done to support their medicinal use. She was instantly transported to her childhood backyard, where her mother grew mint (or “hierbabuena,” which translates to “good plant”). She would tear off a few leaves to make tea whenever Quintanilla-Arteaga had a stomachache. In that moment, she realized her mother was ultimately right about the medicinal potential of mint leaves.

While attending Georgetown, Quintanilla-Arteaga conducted research part time with Beverly Mock, Ph.D., Deputy Chief of the Laboratory of Cancer Biology and Genetics, as a special volunteer. As her time in graduate school and the lab began to come to an end, she spoke with Dr. Mock about becoming a full-fledged fellow. Dr. Mock then referred her to the iCURE program, as she thought it would align with Quintanilla-Arteaga’s interests and goals. After applying, Quintanilla-Arteaga was accepted and able to continue her research in Dr. Mock’s lab focused on proteasome inhibitor resistance in multiple myeloma, a type of cancer that begins in white blood cells that produce antibodies, called plasma cells.

Of the program, Quintanilla-Arteaga is very grateful of the opportunities given to her and says, “I would highly encourage people who identify as minorities to apply to this program … this program is [a chance] to pursue opportunities that otherwise wouldn’t be available.”